GOP Launches First Probe Into Joe Biden: “The Committee is investigating President Biden’s failure to return vice-presidential records, including classified documents, to the National Archives and Records Administration in violation of the Presidential Records Act” 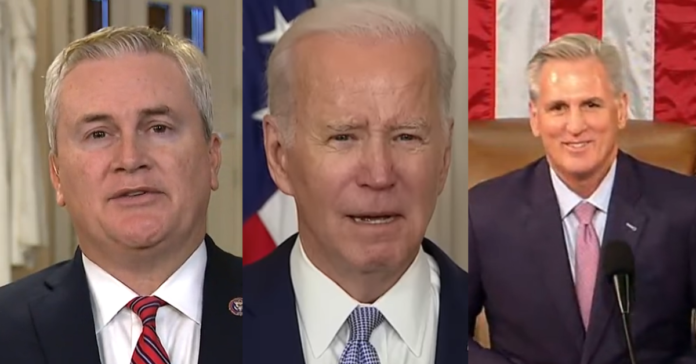 The Committee on Oversight and Accountability launched an investigation into President Joe Biden after classified documents were found in a Biden think tank in Washington, D.C.

Committee on Oversight and Accountability Chairman James Comer wrote a letter to White House Counsel Stuart Delery that said: “The Committee on Oversight and Accountability is investigating President Biden’s failure to return vice-presidential records — including highly classified documents — to the National Archives and Records Administration (NARA) in violation of the Presidential Records Act.

“Under the Biden Administration, the Department of Justice and NARA have made compliance with the Presidential Records Act a top priority.

“President Biden has claimed he was not going to ‘get myself in the middle of whether or not the Justice Department should move or not move on certain actions they could take.’

“The Committee expects President Biden will receive equal treatment under the law given that he maintained classified documents in his unsecured office for several years with access to an unknown number of people.

“President Biden and his son, Hunter Biden, also planned to share an office with an individual affiliated with the Chinese Communist Party, which raises questions about who else had access to these highly sensitive documents because of President Biden’s ‘totally irresponsible’ actions.”

“All documents retrieved from President Biden’s personal office at the Penn Biden Center;

“All internal documents and communications regarding the documents retrieved from President Biden’s personal office at the Penn Biden Center;

“A list of all people who had access to President Biden’s personal office at the Penn Biden Center;

“All documents and communications related to the handling of the classified material by President Biden’s personal lawyers—including but not limited to their security clearance status;

“All documents and communications between or among the White House and the Department of Justice or NARA regarding the documents retrieved from President Biden’s personal office at the Penn Biden Center,” the letter said.

Among the items from Joe Biden’s time as vice president discovered in a private office last fall are 10 classified documents including US intelligence memos and briefing materials that covered topics including Ukraine, Iran and the United Kingdom, according to a source familiar with the matter.

Attorney General Merrick Garland has received a preliminary report on the documents inquiry, a law enforcement source said, and now faces the critical decision on how to proceed, including whether to open a full-blown criminal investigation.

The Republican-led House Oversight Committee has launched an investigation into the documents marked classified that were found at a private office once used by Pres. Biden. Chairman James Comer joins CBS News’ @nancycordes to discuss what answers the committee wants. pic.twitter.com/a7Ewfrc5HR