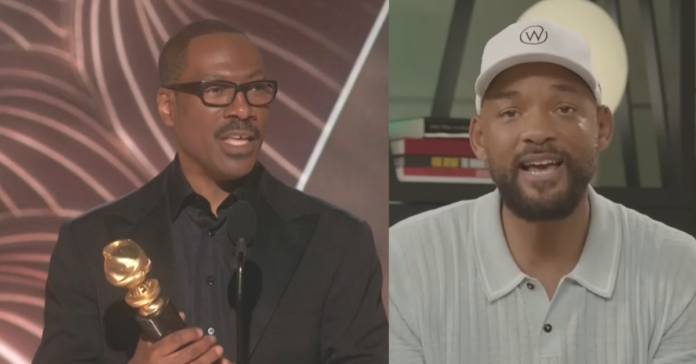 “We’re thrilled to be celebrating the lasting impact on film and television that his career – in front of and behind the camera – has had through the decades.” Eddie brought down the house when he accepted the award with a joke about the disgraced Will Smith.

After Eddie won, he took the opportunity to mock Will Smith: “I want to let you know that there is a definitive blueprint that you can follow to achieve success, prosperity, longevity, and peace of mind. It’s very simple, it’s three things. Pay your taxes. Mind your business.

“And get Will Smith’s wife’s name out of your f*cking mouth.”

The Golden Globes issued a statement that said:

“The highly acclaimed star of legendary films such as 48 Hours, Trading Places, Beverly Hills Cop, Coming to America, The Nutty Professor, Dreamgirls, and others will accept the honor at the 2023 Golden Globe Awards Ceremony on Tuesday, Jan. 10, 2023 airing live coast-to-coast from 5-8 p.m. PT/8-11 p.m. ET on NBC and streaming on Peacock.

“The Cecil B. deMille Award, historically chosen by the HFPA Board of Directors, is presented to a talented individual for their outstanding contributions to the world of entertainment.

Eddie Murphy would be the only person to make a Will Smith joke that was actually funny LOL #GoldenGlobes pic.twitter.com/Qdaeod8a4M

“In a career that has spanned five decades, Murphy’s multi-faceted and moving performances, such as his role as singer James Thunder in “Dreamgirls,” have earned him a Golden Globe Award, SAG Award, Emmy Award, and Academy Award nomination.

“Murphy was most recently seen starring in the Amazon streaming hit “Coming 2 America,” the long-awaited sequel to his 1988 box-office hit, as well as portraying legendary underground comic personality Rudy Ray Moore in the Netflix biopic “Dolemite Is My Name,” a performance that garnered him Golden Globes nominations for Best Picture Comedy/Musical and Lead Actor Motion Picture Musical or Comedy.

“In 2020, he received an Emmy Award for Outstanding Guest Actor in a Comedy Series for his return to Saturday Night Live.

“Murphy starred in the 1997 hit comedy The Nutty Professor in which he portrayed multiple characters and received Golden Globe and other award nominations.

“Murphy won an Annie Award and earned BAFTA and MTV Movie Award nominations for his performance in the first Shrek, and he reprised the role of Donkey in the final installment of the hugely successful franchise, Shrek Goes Fourth.

“Murphy’s upcoming projects include co-starring in the romantic comedy You People and producing and starring in Beverly Hills Cop 4.

“In 2015, Murphy received the Mark Twain Prize for American Humor Award from the John F. Kennedy Center for the Performing Arts,” the Globes said.