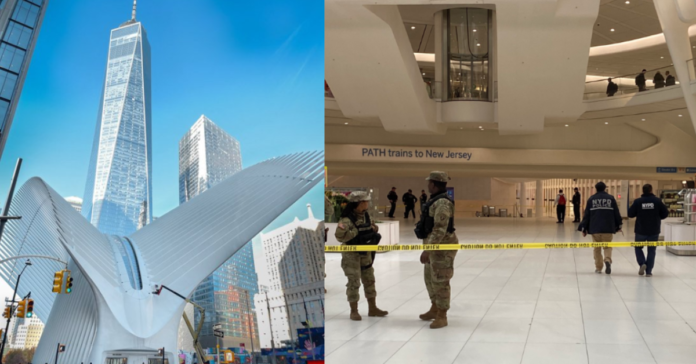 The NYPD bomb squad is investigating a pressure cooker that was found on the last car of a PATH train at the Oculus Center in the World Trade Center on Tuesday NBC reported.

The NYPD has ordered people to stay clear of the Oculus Center transportation hub saying, “Due to a police investigation please avoid The Oculus at this time.” The Port Authority later confirmed that the station has been evacuated.

The PATH train reportedly came from Newark, New Jersey. PATH service from Hoboken to the World Trade Center has been suspended and trains are bypassing the area.

Emergency vehicles, including NYPD vans and helicopters, were seen outside the area as police continue to probe and evacuate the station.

The Oculus – which is the transportation hub that houses the World Trade Center’s Subway and PATH platforms – is one of the buildings erected following the Twin Tower attacks in 2001.

NWK-WTC is operating NWK-EXPL. PAPD continues to investigate an incident at WTC.’

ADVISORY: Due to a police investigation please avoid The Oculus at this time. pic.twitter.com/8L6HBvx5d3

The Oculus has been evacuated, and train services stop after a pressure cooker was found

"Tourniquets, Combat Gauze, and Breathing Tubes"... What The Heck Was Ray Epps Planning to Do on Jan 6th?