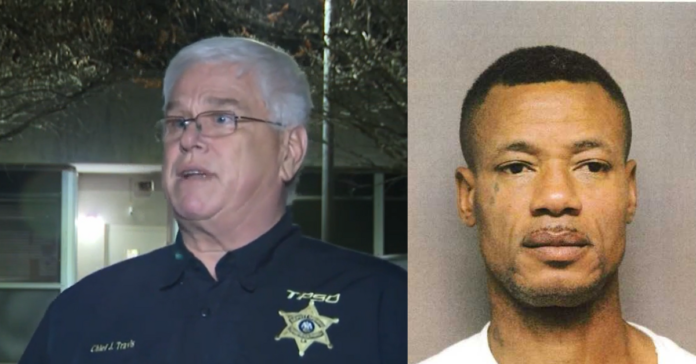 A career criminal who was out on parole after serving nearly 20 years in prison for armed robbery picked the wrong house to try to break in and was shot dead by a terrified mom who was protecting her two young kids.

According to the Tangipahoa Parish Sheriff’s Office, Robert Rheams, 51, of Hammond, Louisiana was shot and killed during a home invasion on Jan. 8. According to deputies, Rheams forced his way into a home with a woman and her two young children around 5 a.m.

Rheams was armed with a lug wrench and shovel. He had just carjacked an out-of-state worker at a hotel. A physical altercation took place between Rheams and the homeowner according to deputies which led to Rheams being shot by the mom.

Rheams was later pronounced deceased on the scene by the Tangipahoa Parish Coroner’s Office.

Chief Jimmy Travis says Rheams was out on parole after serving almost 20 years in prison for armed robbery.

Detectives tied Rheams to an attempted carjacking hours prior.

Travis said that the car owner was an out-of-state worker staying in a local motel when he was asked by the suspect to give him a ride.

“During the drive, he started striking the driver with his fist and the driver ran into a ditch causing the car to become stuck,” Travis said.

“The driver was able to exit the car and flee to safety.”

Authorities say Robert Rheams broke into a woman’s house in Hammond and a physical altercation ensued before she fatally shot him while protecting her two young children: https://t.co/PpiyXDKkAn pic.twitter.com/VQINVEzuPZ

Robert Rheams was armed with a shovel and a lug wrench when he broke into a Louisiana home. But he was no match for a protective mom.

Robert Rheams, 51, was armed with a shovel and a lug wrench when he broke into the home of a woman and her two young children, detectives say. >> https://t.co/JUOtfrWLtm