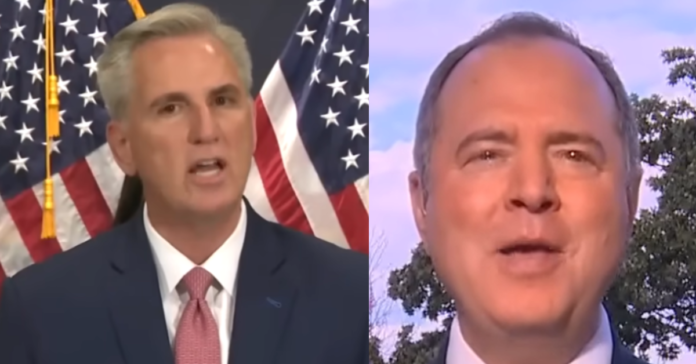 House Speaker Kevin McCarthy confirmed Monday night that Democratic Reps. Adam Schiff, Eric Swalwell, and Ilhan Omar will not be members of the committees they previously served on.

Schiff served as chair of the House Intelligence Committee during the last Congress. Swalwell was a member of the same. Omar previously served on the House Foreign Affairs Committee.

McCarthy said he is making these moves for a few reasons. He said Swalwell can’t get a regular security clearance if he tried so Kevin will not give him one. McCarthy said he will remove Schiff because Adam lied to the American people.

“Those two won’t be on intel,” McCarthy said about Schiff and Swalwell. “Swalwell can’t get a security clearance in the private sector. I’m not going to give him a government security clearance. Schiff has lied too many times to the American public. He should not be on Intel.”

“Remember, this is what Nancy Pelosi – this is the type of Congress she wanted to have,” Kevin said referring to when the Dems kicked Majorie Taylor Green off her committee.

According to Punchbowl News:

As speaker, McCarthy can unilaterally block Schiff and Swalwell from serving on the Intelligence panel. The full House would have to act against Omar.

The bigger issue regarding Schiff, after the Twitter files proved he tried to get reporters banned from Twitter in direct violation of the US Constitution, is whether will he be forced to resign in disgrace for his actions or will the Department of Justice hold him to account?

Omar, rather than offer an olive branch to Kevin, ripped him in a new interview all but sealing her fate.

“I do have to say for a speaker that has faced a historic humiliation — that had gotten elected after 15 rounds, surpassing a record that was set pre-Civil War — there is an opportunity here, as he has said to not do things in the way in which it has been done before.

Out: Schiff, Swalwell and Omar.
In: Gosar, Santos and MTG.
With passage of the House rules package, the next big fight for the chamber will be “populating” its committees. And that’s going to lead to a big partisan brawl on the floor. https://t.co/fPDfqh0StL

It is curious that members like Adam Schiff refer to an agreement to allow greater democratic deliberation as an invitation for “chaos.” https://t.co/eL0KTzvr2h The agreement would allow more time to review and amend legislation-rights denied under Pelosi. https://t.co/w5nNB5551j