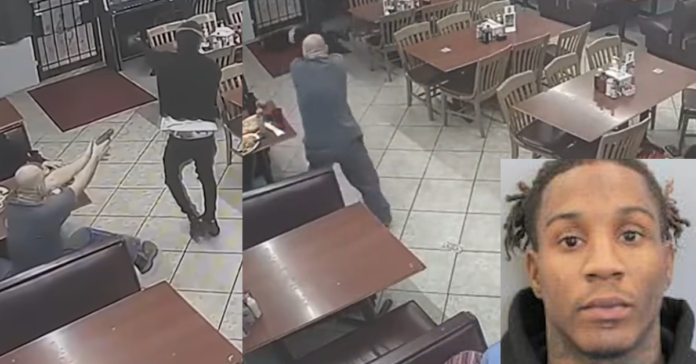 The armed robber shot dead in a Houston Taqueria by a hero citizen has been identified as career criminal Eric Eugene Washington, 30. Washington had previously served 6 years of a 15-year sentence for aggravated assault with a deadly weapon.

At the time of the shooting, he was out on bond for a December domestic violence and aggravated battery charge against his girlfriend. Washington was convicted in 2015 in connection to the murder of 52-year-old Hamid Waraich, the owner of a Boost Mobile cell phone store who was shot in the back during a robbery. He was paroled in 2021 after serving six years.

Sean Waraich, the victim’s son, said Washington is “an evil criminal that took joy from harassing and robbing innocent families.” He called the man who finally put a stop to Washington’s criminal behavior “a true hero who did the right thing in stopping the robber and protecting the community from a dangerous perpetrator.”

Aman Waraich, another son of the victim, said: “If the guy who stopped Eric was around 10 years ago, maybe I’d still have my dad.”

The man who shot the thug is cooperating with authorities.

“My client, who wishes to remain anonymous, was dining with a friend at El Ranchito Taqueria and as it has been seen on video, a robbery suspect entered the restaurant, and pointed a weapon at my client and the other customers demanding money.

“In fear of his life and his friend’s life my client acted to protect everyone in the restaurant.

“In Texas, a shooting is justified in self-defense, defense of others and in defense of property. The customer has met with the Harris County District Attorney’s Office and Investigators with HPD homicide.

“He fully intends to continue cooperating with the ongoing investigation.

“When the investigation is complete, this case will be presented to a Grand Jury. We are confident that a Grand Jury will conclude that the shooting was justified under Texas Law.

“This event has been very traumatic, taking a human life is something he does not take lightly and will burden him for the rest of his life.

“For that reason, he wishes to remain anonymous. Due to the overwhelming coverage, we ask the media and the public to respect his privacy,” the attorney said.

This is what happens when you try to rob a taqueria in Houston😬 pic.twitter.com/lu7eoSTSsU