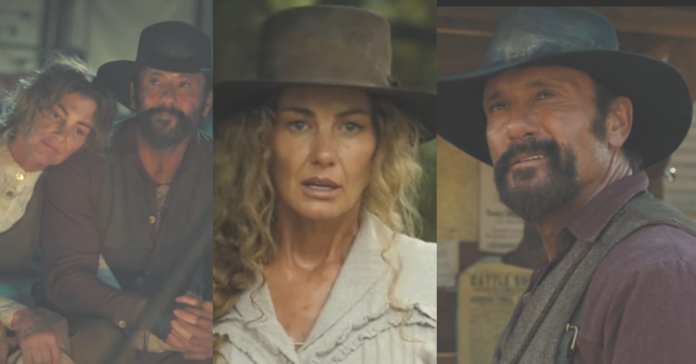 The smash hit Yellowstone continues to set records for Paramount after that network took a chance on the modern western. The show sat at HBO for a year before Paramount agreed to put it into production.

The show did well in the heartland before catching fire across the nation after moving to Sunday. In the show’s fifth season, ‘Yellowstone’ is averaging 13 million total viewers an episode according to Nielsen data. But Paramount had no idea the show would smash records and sold the streaming rights.

When the network launched its own streaming service later executives could not drive subscriptions using that hit show as the rights were assigned to a competitor. So the network signed a deal with show creator Taylor Sheridan to expand the Yellowstone universe hoping for more hits to drive the streaming business.

A smart move. The first show was a prequel to Yellowstone that told the story of how the Dutton family made it to Montana. “1883” starred country music superstars Faith Hill and Tim McGraw and was an immediate hit.

The story follows the post-Civil war generation of the Dutton family as they leave Tennessee, journey to Fort Worth, Texas, and join a wagon train making the difficult trip west to Oregon, before settling in Montana to establish what would eventually become the Yellowstone Ranch.

The show drove more subscriptions for Paramount’s streaming service than any original series in its first year, 2021, and incredibly did it again in 2022.

According to The Wall Street Journal:

“1883” was shot almost entirely outdoors in Texas and Montana over five months in 2021 that began in brutal heat and ended with bitter cold.

“When the frontier drama premiered in December of that year, amid a marketing blitz linked to the fourth season of “Yellowstone,” the strategy for herding fans over to Paramount+ paid off.

“1883” led more people to sign up for Paramount+ subscriptions than any other original series on the service, according to the company.

More surprising, “1883” remained No. 1 by that measure through 2022. In international markets, where westerns are widely assumed to be a nonstarter, “1883” was the No. 3 series on Paramount+ last year.

In second place was “Yellowstone,” which the service carries outside the U.S. (No. 1 was “Halo,” a sci-fi war series based on the videogame of the same name.)

“1883” was a proof of concept, but provided finite mileage. The series spanned just 10 episodes and ended with some core characters dead. “1883” had also established a seasonal schedule similar to the broadcast-television calendar.

Fans now expected prequels to launch with each new season of the “Yellowstone” flagship, but that created a very short runway for producers to land new shows.

Paramount is hoping to strike gold for the third time with ‘1923,’ the next installment in the franchise.

The show picks up the Dutton’s story in 1923. It stars Harrison Ford and Helen Mirren.

1883. It’s Taylor Sheridan’s world and we are just living in it

He is making me fall in love with the plains, the horses, the cowboy life. You can’t ask for much more in a tv show

Elsa stole my heart, her narrating is amazing as well 9⃣

On to the next installment – 1923 pic.twitter.com/EepoZ8VtPg

Honestly Iove and recommend it. pic.twitter.com/VNChExkSSi