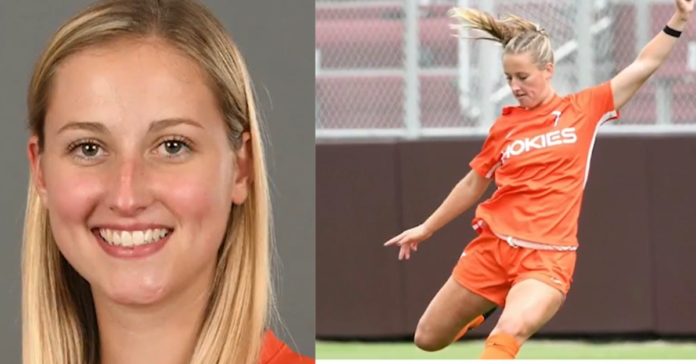 A former Virginia Tech women’s soccer player who refused to kneel during a reading of a “unity statement” in support of BLM and who accused her coach of benching her because of her political beliefs will reportedly receive at least $100,000 as part of an agreement to settle a federal lawsuit.

“Ultimately, Adair may convince a jury that this coaching decision was based solely on Hening’s poor play during the UVA game, but the court, viewing the evidence in the light most favorable to Hening, cannot reach that conclusion as a matter of law.”

The three-day trial was scheduled for later this month but was canceled after a settlement was reached. Jonathan Turley broke down the lawsuit:

“Hening alleges that Adair wanted the student to emulate former NFL player Colin Kaepernick in kneeling before games and wanted to replace the name “Hokies” on the back of their jerseys with the names of people killed by police.

“During meetings, Hening objected to the changes as compelled speech and said that she disagreed with aspects of the BLM movement. She was then allegedly labeled a “racist” by some on the team.

“The complaint states that only two students objected to kneeling but the other student was on a scholarship and her parents called Adair to warn him not to harass their daughter for her political views.

“Instead, Hening alleges, Adair singled her out as well as speaking negatively about some people who believe “all lives matter.” She says that her refusal to kneel led to her benching and eventual removal from the team.

“It also allegedly resulted in a torrent of abuse verbally and on social media.

“The complaint alleges that, during the halftime in a game with Virginia, Adair singled out Hening and ridiculed and denounced her in front of the team as being selfish and “bitching and moaning” rather than being a team player in supporting the diversity displays.

“She was pulled as a starter in the next game against Clemson and again Adair allegedly berated her publicly.

“She was also left off the starters in the next game against North Carolina.  She claims that the abuse and shunning became so great that she was forced to resign,” Turley wrote.

Adair released a statement that said in part, “I am pleased the case against me has been closed and I am free to move forward clear of any wrongdoing.”

“The terms of the settlement did not include an admission of wrongdoing by either Hening or Adair.”

A former Virginia Tech soccer player will receive a six-figure settlement of her lawsuit after being benched for not kneeling to protest racism. https://t.co/pbIQeO0uFQ Some of us previously denounced the demand as compelled speech… https://t.co/mJRTrQeyuH

I am very proud to represent Kiersten Hening in her successful suit against Coach “Chugger” Adair of Virginia Tech. Adair benched my client after she refused to kneel for a BLM unity statement and now he is paying her over $100,000 in a settlement.

Speaker of The House Version