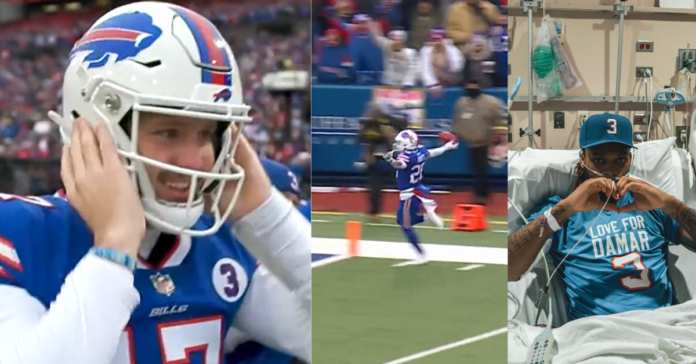 The Buffalo Bills returned to the field for the first time since safety Damar Hamlin suffered an on-field cardiac arrest today and delivered the perfect Hollywood movie moment.

On the first play of the game against the New England Patriots, running back Nyheim Hines caught a short kickoff and went 96 yards for a touchdown to give Buffalo a 7-0 lead. Bills fans erupted. As did social media.

Damar Hamlin, watching the game from a hospital in Cincinnati couldn’t believe it and posted on social media and said: “OMFG!!!!!!!!!!!!!” Players from both teams wore shirts honoring Hamlin in warmups.

Shortly before the game, Hamlin, posted a photo of himself and his family preparing to watch from his hospital bed.

He also sent a heartfelt message to his supporters:

“Nothing I Want More Than To Be Running Out That Tunnel With My Brothers.

“God Using Me In A Different Way Today.

“Tell Someone You Love Them Today.”

The @BuffaloBills return the opening kick. You couldn’t write this script.

As called on the Buffalo Bills Radio Network: pic.twitter.com/mZwbmIsi9L