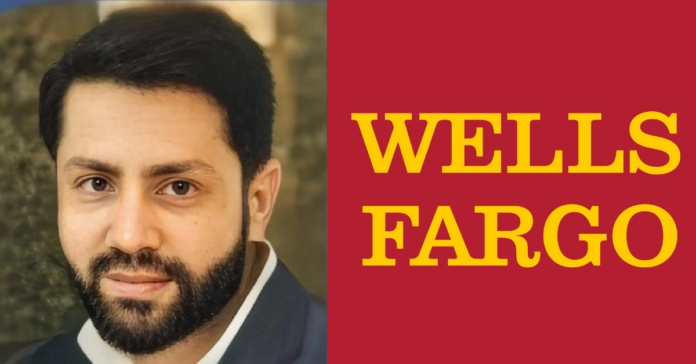 Wells Fargo fired a Vice President for urinating on a woman on a plane. Shankar Mishra worked for Wells Fargo at its Mumbai corporate office. He was the bank’s vice president of operations in India.

He was fired for urinating on a 72-year-old woman while they both flew business class on an Air India flight. Mishra was drunk on the Nov. 26 flight from New York to New Delhi. He apologized to the woman after sobering up and begged her not to file a complaint. She did not buy his crocodile tears and filed a complaint but stopped short, after his waterworks, of having him arrested and charged.

The woman said in her complaint: “A male business class passenger walked to my seat, completely inebriated. He unzipped his pants and urinated on me and kept standing there until the person sitting next to me tapped him and told him to go back to his seat, at which point he staggered back to his seat.

“In my already distraught state, I was further disoriented by being made to confront and negotiate with the perpetrator of the horrific incident in close quarters.

“I told him that his actions were inexcusable, but in the face of his pleading and begging in front of me, and my own shock and trauma, I found it difficult to insist on his arrest or to press charges against him.”

But the airline overruled her and told Indian authorities.

“Air India has taken a very serious view of the incident, where a passenger behaved in an unacceptable and undignified manner on the New York-Delhi flight that caused extreme distress to a fellow passenger.

“A police complaint has already been lodged and Air India is committed to assist the law enforcement agencies as well as regulatory authorities.”

Mishra was arrested by Indian authorities after a short search.

“Mishra, a resident of Mumbai, was sought by police for days. In an apparent attempt to evade authorities, he switched off his phone on Jan. 3 and was using auto rickshaws to get around, Hindustan Times reported.

“Law enforcement officials were finally able to track him down at 3:30 am local time on Saturday after he made a credit card purchase in Bangalore and gave away his location.”

I don’t think he (Shankar Mishra) came drunk. He had four drinks over a 45-minute lunch. I was sitting with him. I had the window seat, he had the aisle seat: Sugata Bhattacharjee, eyewitness

He further talks about the behaviour of the lady who was allegedly urinated upon. pic.twitter.com/ltur8fyTWM

Former AG Wants to Know Why The House Votes With Pen and Paper, But We Vote Electronically...