Ron DeSantis Reaches Limit, Calls Up National Guard: “When Biden continues to ignore his legal responsibilities, we will step in to support our communities” 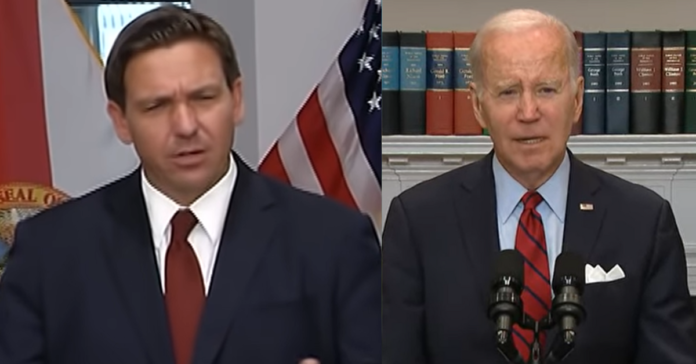 Gov. Ron DeSantis (R-FL) reached his limit with President Joe Biden and activated the state’s National Guard to respond to an “alarming influx” of immigrants entering the United States from Cuba and Haiti.

DeSantis signed an executive order Friday to send in military to help local law enforcement officers who had to be called in to help Coast Guard and Border Patrol respond to hundreds of immigrant encounters.

DeSantis said in his order: “Because of the foregoing conditions, I hereby find that the migration of unauthorized aliens to the State of Florida is likely to constitute a major disaster. I, therefore, declare that a state of emergency exists in the State of Florida. I order the Adjutant General to activate the Florida National Guard, as needed, to deal with this emergency.”

“During the past 24 hours, Border Patrol agents & LE partners responded to 5 migrant landings & encountered 90 Cuban migrants in the Florida Keys.”

First responders in Monroe County, which includes Key West, were called to help federal authorities deal with over 300 immigrants in Dry Tortugas National Park, about 70 miles west of the Florida Keys.

The National Park was closed due to the influx: “Dry Tortugas National Park will temporarily close to public access while law enforcement and medical personnel evaluate, provide care for and coordinate transport to Key West for approximately 300 migrants who arrived in the park over the past couple of days.

“The closure, which is expected to last several days, is necessary for the safety of visitors and staff because of the resources and space needed to attend to the migrants. Concession-operated ferry and sea plane services are temporarily suspended.

“Like elsewhere in the Florida Keys, the park has recently seen an increase in people arriving by boat from Cuba and landing on the islands of Dry Tortugas National Park. Park first responders provide food, water and basic medical attention until the Department of Homeland Security arrives and takes the lead.

Over the past five months, the Coast Guard and Border Patrol have encountered more than 12,000 people attempting to enter the U.S. without permission through the state oFlorida.

“As the negative impacts of Biden’s lawless immigration policies continue unabated, the burden of the Biden administration’s failure falls on local law enforcement who lack the resources to deal with the crisis.

“When Biden continues to ignore his legal responsibilities, we will step in to support our communities.

“Florida has a long history of helping refugees, including Cubans and others fleeing communist regimes, find support after they arrive in the United States, however, this has always involved support from the Federal Government and a large, coordinated effort amongst state, federal and local governments.”

Earlier today, the migrants were safely turned over to Border Patrol custody. We will continue to work alongside our interagency partners to apply the appropriate care & ensure the humane processing of these individuals, consistent with our laws. #Breaking #Update #Cuba #CBP https://t.co/2k1SNF4sOv

Kristi Noem Puts Liz Cheney On Notice, Demands To Know Who “Leaked Social Security Numbers Of Me, My Husband And My 3 Kids”

Journalist Threatens To Sue Adam Schiff ‘Personally': “We are exploring all legal options, including suing Adam Schiff personally for defamation”