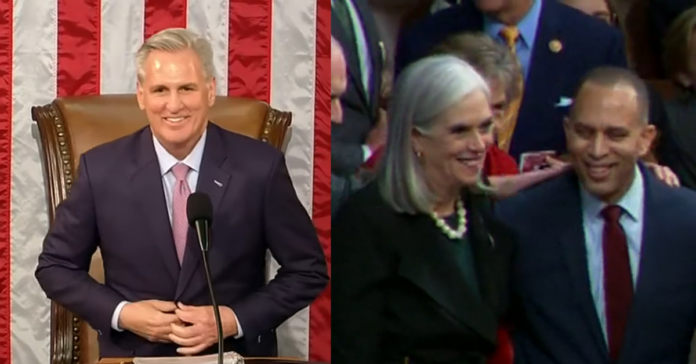 Kevin McCarthy brought down the house last night with a funny joke after he finally won the election to be the next Speaker of the House of Representatives. Kevin fought through 15 rounds of voting before winning the job.

He said: “Our nation is worth fighting for. You know – my father always told me: It’s not how you start, it’s how you finish. And now we need to finish strong for the American people.

“If the son of a fireman and grandchild of immigrants can rise to the highest position in the most important legislative body in the world and if my colleague Hakeem Jeffries with his life story can rise to lead his party then opportunity and democracy still thrive in America.

“That was easy, huh? … Hakeem, I gotta warn ya. Two years ago, I got 100 percent of the vote from my conference” — Kevin McCarthy has jokes pic.twitter.com/7pqvAnOgqo

“To Leader Jeffries – there will be times we will agree and many times we will differ. I promise that our debates will be passionate, but never personal.

“And now the hard work begins. What we do here today, next week, next month, and next year will set the tone for everything that follows.

“We will also address America’s long-term challenges: the debt and the Chinese Communist Party. Congress must speak with one voice on both of these issues.

“Our system is built on checks and balances. It’s time for us to be the check and provide some balance to the President’s policies.

“There is nothing more important than making it possible for American families to live and enjoy the lives they deserve.”

Kevin brought down the House and got big laughs from bogh sides of the aisle when he said:

“Hakeem – I need to warn you: I also won 100 percent of my conference vote on this floor two years ago. So, good luck.”

Kevin McCarthy: “I know the night is late, but when we come back, our very first bill will repeal the funding for 87,000 new IRS agents.” pic.twitter.com/vuEkmIYJ9O

It is curious that members like Adam Schiff refer to an agreement to allow greater democratic deliberation as an invitation for “chaos.” https://t.co/eL0KTzvr2h The agreement would allow more time to review and amend legislation-rights denied under Pelosi. https://t.co/w5nNB5551j

This has never been about me or Kevin McCarthy. It’s about the American people.

America wants to know that the rules of the House of Reps would never allow something like this horrendous omnibus bill to ever pass ever again.

That’s what @RepBoebert and I have been working on. pic.twitter.com/TpBr2xZs0X

Journalist Threatens To Sue Adam Schiff ‘Personally': “We are exploring all legal options, including suing Adam Schiff personally for defamation”