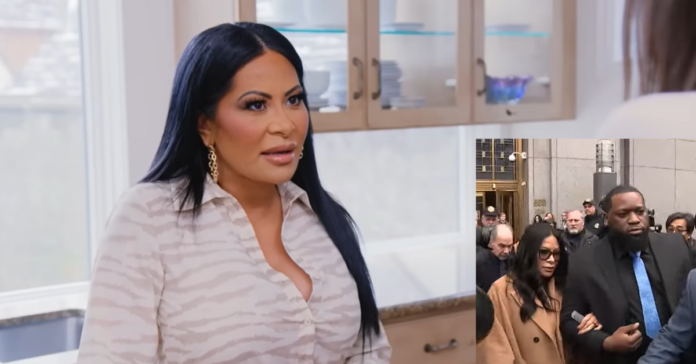 U.S. District Court Judge Sidney Stein threw the book at reality TV star Jen Shaw sentencing the Reality Housewives star to 6.5 years in prison for her role in a telemarketing scam that targeted the elderly.

In addition to the prison term, Shaw was sentenced to five years of supervised release, ordered to forfeit $6,500,000, 30 luxury items, and 78 counterfeit luxury items, and to pay $6,645,251 in restitution. She previously pled guilty to one count of conspiracy to commit wire fraud in connection with telemarketing.

U.S. Attorney Damian Williams said: “With today’s sentence, Jennifer Shah finally faces the consequences of the many years she spent targeting vulnerable, elderly victims. These individuals were lured in by false promises of financial security, but in reality, Shah and her co-conspirators defrauded them out of their savings and left them with nothing to show for it.

“This conviction and sentence demonstrate once again that we will continue to vigorously protect victims of financial fraud and hold accountable those who engage in fraudulent schemes.”

DOJ issued a statement that said: “From at least 2012 until her arrest in March 2021, SHAH was an integral leader of a wide-ranging, nationwide telemarketing fraud scheme that victimized thousands of innocent people.

“In particular, SHAH knowingly and intentionally facilitated the sale of “leads” — contact information for potential victims who had been identified as susceptible to the scheme’s lies — to sales floors that were perpetrating the Business Opportunity Scheme and, during the latter portion of her participation in the scheme, owned and operated one of the sales floors that was part of the scheme.

“Many of SHAH’s victims were elderly or vulnerable.

“Many of those people suffered significant financial hardship and damage.  At SHAH’s direction, victims were defrauded over and over again until they had nothing left.

“She and her co-conspirators persisted in their conduct until the victims’ bank accounts were empty, their credit cards were at their limits, and there was nothing more to take.

“SHAH was not deterred by the Federal Trade Commission’s investigations or enforcement actions, nor by learning that dozens of her co-conspirators had been arrested by federal law enforcement, pled guilty for their roles in the scheme, and that two were convicted at trial.

“SHAH was not ignorant of these developments: she took a series of increasingly extravagant steps to conceal her criminal conduct from the authorities.

“She directed others to lie, she put businesses and bank accounts in the name of others, she required payment in cash, she instructed others to delete text messages and electronic documents, she moved some of her operations overseas, and she tried to put computers and other evidence beyond the reach of investigators.

“These efforts were not short-lived or narrow in scope.  She engaged in a yearslong, comprehensive effort to hide her continued role in the scheme.

“In addition to the prison term, SHAH, 49, of Salt Lake City, Utah, was sentenced to five years of supervised release.