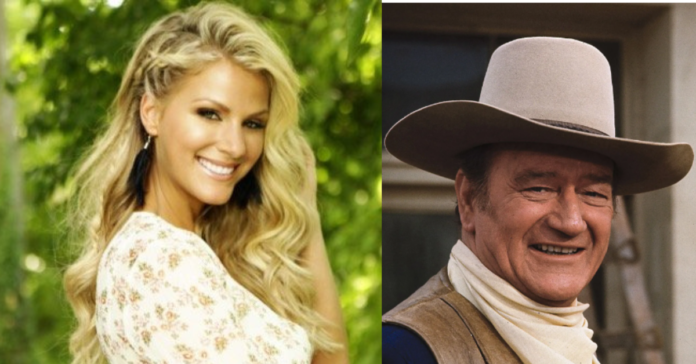 Jennifer Wayne, the granddaughter of legendary Hollywood actor John Wayne, left California for Nashville because it is “very family-friendly, the quality of life is awesome. Wayne is a musician and is teaming up with fellow artist Brad Rempel for a new series on The Design Network titled “Flip U.”

She said: “What drew me to Nashville after living in California is that it’s very family-friendly,” she reflected. “The quality of life is awesome. People just know it for music and it’s a great sports town too. But it’s also a very young, active and exciting place to be.

“There are so many great companies moving here. So many families laying down roots here. So many professionals looking for a fresh start. There’s a lot of opportunity here. I know my grandfather being John Wayne is awesome and opens a lot of doors, but you almost have more pressure once those doors are open.

“People expect more from you. So you have to show up and do your part. I failed a lot in the beginning and I learned a lot from those failures.

“ But luckily, I’m in a whole different genre. I’m in music. He was in acting and I heard he was tone-deaf. So I think I’m OK. I think I’ve succeeded on that part.”

“I like looking at the bones of a property,” she said about her real estate career.

“That way I can see the bigger picture. A lot of people will walk into these spaces that are left in just terrible conditions. Some people leave their food out and there are just bugs and stuff everywhere.

“It’s a turnoff for a lot of people walking in and seeing all this junk.

“Immediately they’re like, ‘I don’t even want to deal with this.’ But the main thing I like to look at is the bones of the property. If it’s cleaned out, could you open the space?

“Could it be modernized a little bit? I think you have to look past the initial viewing of properties and see if there’s promise there, especially if it’s in a great location.

“My biggest mistake was not buying something I saw before.

“I was too scared at one point to buy this piece of property.

“But now that I look back, I could kick myself for not buying that property. It’s scary, especially when it comes to investing, but sometimes, you just have to pull the trigger and do it.

“I’ve missed out on a lot in my early years because I was just too scared.

“Brad and I have been friends for years – we’ve met each over music.

“We’re both in bands, but a couple of years ago, we started talking about real estate. I’ll never forget it – we were backstage, and I was looking for a place in Columbia, which is a little south of Nashville.

“And he had just renovated a cottage there.

“So we just started talking about real estate. Over the last couple of years, we’ve kept in touch and given each other tips.

“He had worked with The Design Network before, and they approached him about this show.

“He was nice enough to bring me in. I’m lucky I know him,” she said.