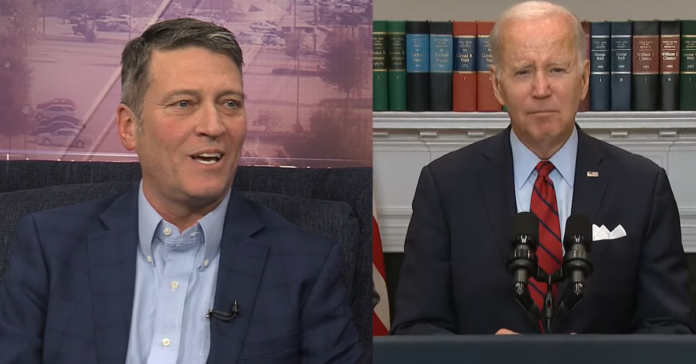 Rep. Ronny Jackson, R-Texas is suing President Joe Biden over sending a half billion U.S. taxpayer dollars in Palestinian aid without making sure that the Palestinian Authority is not funding terrorism. The lawsuit was filed by America First Legal (AFL), a government watchdog group. The plaintiffs include victims of terrorism along with Jackson.

Jackson said: “Joe Biden is breaking the law by allowing our tax dollars to fund terrorism in Israel, and he must be stopped. I have deep respect for my fellow plaintiffs who have been tragically and directly impacted by Pay to Slay, and I am proud to be on the same team as we hold this failed administration accountable.”

The complaint was filed in U.S. District Court for the Northern District of Texas. It names Biden and Secretary of State Antony Blinken as defendants claiming they violated the Taylor Force Act. That law is named for Taylor Force, a U.S. Army veteran of Iraq and Afghanistan who was killed by Palestinian terrorists in 2016.

The law prohibits U.S. economic aid to the Palestinian Authority unless and until the Secretary of State certifies that the group has terminated funding of violent extremism.

Reed Rubenstein, the AFL’s director of oversight claims Buden is being naive and the aid the administration gives to NGOs ends up helping the Palestinian ruling government.

“We want to enforce accountability and transparency.

“These so-called NGOs are reporting to the Palestinian ruling government.

“For the administration to try to separate the NGOs from the ruling regime is ludicrous.

“The administration may say the funding is benefiting the Palestinian people, but this money for aid frees up the Palestinian Authority — if it doesn’t spend money on basic government functions like cleaning up garbage — to spend on other things. Money is fungible.

“It turns out, if you increase funding for violence, you will get an increase in violence.”

“President Biden and Secretary of State Blinken are dishonoring the memory and legacy of a good man and ignoring the citizens of the United States who understand that taxpayer dollars should not be used to fund the killing of innocent civilians,” the parents of Taylor Force said.

“I salute Congressman Jackson for his leadership in suing the Biden Administration to stop Biden from financing terrorism against those who visit or live in Israel,” said America First Legal President Stephen Miller.

“Joe Biden is breaking federal law by using taxpayer money to directly benefit the Palestinian Authority, knowing full well that it subsidizes terrorism, and we are asking a federal judge to shut these illegal payments down.”

In March 2021, the State Department told Congress in March 2021: “The department was unable to certify that the PA, the PLO, and any successor or affiliated organizations have met the requirements of the Taylor Force Act]”

In October 2022, the State Department told Congress the same.