Tucker Carlson Fires Back At Meghan McCain’s Husband, Calls Him A ‘Moron’ And A ‘Buffoon’ On Fox News 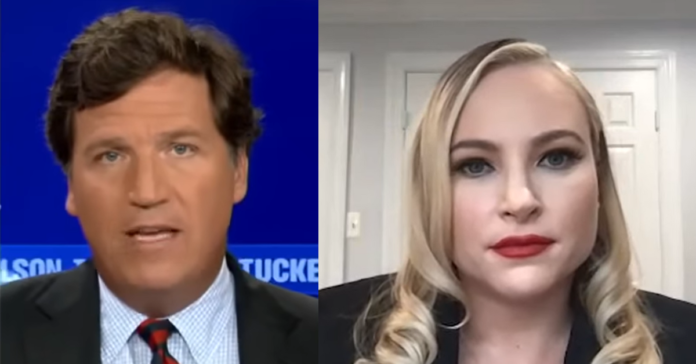 Tucker said: “This is what democracy looks like when you get up close. I want one thing, you want another thing. We schedule a vote to see who gets it, or in this case 11 votes, but whatever. But how is that disaster? Well, it’s not a disaster. It’s how the system is supposed to work. But don’t tell the moron community that.”

Tucker then played a clip of all the pundits whining over the fight for House Spealer which included MSNBC’s Joy Reid and Nicolle Wallace, and Fox News’ Ben Domenech.

“This is what democracy looks like when you get up close… how is that a disaster?”

“It’s not a disaster. It’s how that system is supposed to work.”

Tucker Carlson with a refreshing dose of sanity over McCarthy’s struggle to become Speaker. pic.twitter.com/3qmd0xXDrg

“The way that they’ve gone about trying to achieve these demands has resulted in essentially this terrorist standoff between them and the overwhelming majority of people in their conference,” he said.

“Then another one of the buffoons in the clip you just saw went further and called the whole thing terrorism, which is the remorseless use of violence against a civilian population to effect a political goal.”

Senator Vance: “We need people who actually are fighting to save an American way of life for the next generation. That’s why I’m doing this.” pic.twitter.com/zSdZN4fgHY

I joined @TuckerCarlson tonight to outline why I’m optimistic about the future of the Republican Party. In short, Our ideas are superior. Our candidates are better. There is no reason we can’t win if we make the necessary changes! pic.twitter.com/xvlmHyUasf

Sarah Sanders Warns Criminals Before Inauguration: "We have to expand capacity so we can lock up violent repeat offenders instead of letting them out on the streets so they can commit more crimes”