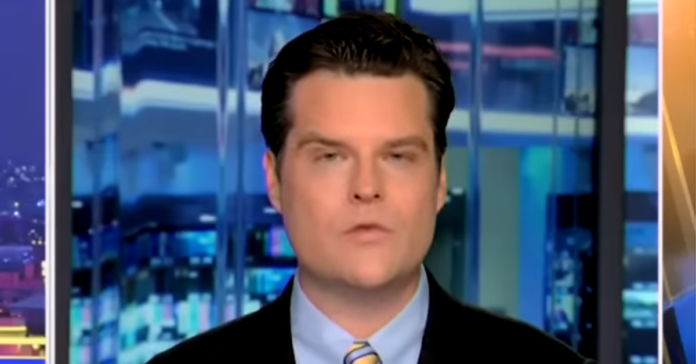 Rep. Matt Gaetz (R-FL) threatened to resign from Congress if Democrats joined Republicans to elect a moderate Republican as Speaker of the House. The rumored plan could happen if Kevin McCarthy can’t secure enough votes to be Speaker or step down if Gaetz and others continue to hold out.

The Democrats have floated the idea a few times and would love the power they would get by providing the votes for the next Speaker. The Democrats would insist on co-control of committees and subpoena power according to some reports but others say they may join moderate Republicans simply for a deal on the debt ceiling.

The debt ceiling will have to be raised at some point over the next year and Gaetz and others are insisting on massive spending cuts from President Joe Biden for raising the ceiling.

Matt appeared on Laura Ingraham’s Fox News show last night where he made the statement.

Below is a transcript of the conversation:

INGRAHAM: Are you going to be OK, Congressman, will you be OK then if there’s ultimately a deal struck with moderate Democrats if Democrats kind of co-control committees?

You’re fine with that?

“If Democrats join up to elect a moderate Republican, I will resign from the House of Representatives” pic.twitter.com/UEIirVUco6

GAETZ: No, absolutely not. That will not happen.

There are two scenarios here.

These 212 Democrats are going to vote for Hakeem Jeffries every single time.

He is a historic candidate for them.

They are not going to cleave off under any circumstance.

I assure you if Democrats join up to elect a moderate Republican, I will resign from the House of Representatives.

That is how certain I am. I can assure your viewers that won’t happen.

Amen.@MattGaetz told Laura tonight on ⁦@IngrahamAngle⁩ that ⁦@GOPLeader⁩’s refusal to join the bipartisan antitrust reforms to hold Big Tech accountable was a key factor in his NO vote.