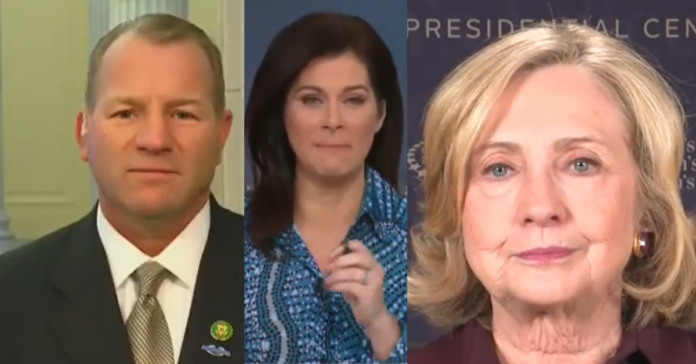 Rep. Troy Nehls (R-TX) went on CNN to talk to host Erin Burnett when he looked into the camera and called the network the “Clinton News Network.” Burnett asked the congressman if he would support GOP leader Kevin McCarthy to the bitter end.

Nehls said: “I’m a combat veteran and served in law enforcement for 30 years. I can be here until July.” Burnett said: “Is that a metaphor for how you feel about this?

“Is your support for McCarthy, there is nothing that can break or shake it, at this point?”

Troy Nehls on CNN: “This is my first time on the Clinton News Network.” pic.twitter.com/ssnkB84MBh

“Listen, I don’t know if you are aware of young lady, but I’m also a member of the House Freedom Caucus.

“So I am one of those America First patriots.

“I have said to my friends, my colleagues in the Freedom Caucus that I don’t believe that this is the battle we should be waging.

“I think the real battle starts when we start drafting legislation and policy in the 118th congress under a Speaker McCarthy.”

Burnett said, “I assume when you called me a young lady it was a compliment.”

Nehls replied, “Of course it was.

“This is my first time on the Clinton News Network. Absolutely.”

“But I’m glad you’re talking to me and I’ll treat you with the respect that you deserve.”

Twelve ballots later, NOTHING has been done for the American people. pic.twitter.com/qJx912QyTb

Rep. Troy Nehls (TX-22) to CNN’s Erin Burnett: “This is my first time on the Clinton News Network.” pic.twitter.com/PfZPJfZhnN