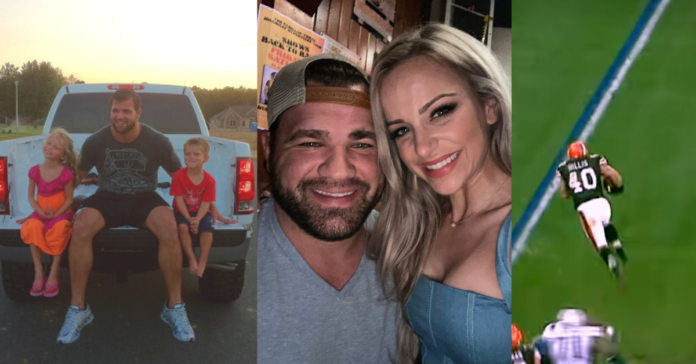 Former star NFL running back Peyton Hillis is reportedly in critical condition after rescuing his children from drowning. Hillis, 36, was drafted by the Denver Broncos in the seventh round of the 2008 NFL Draft.

He broke a breakout year in 2010 rushing for 1,177 yards on 270 carries and scoring 11 touchdowns as a member of the Cleveland Browns.  He played college ball at Arkansas where he had more receiving yards (1,197) than rushing (960) in his four years.

A dozen of his 23 touchdowns came from the ground proving he was a dual threat. Hillis retired from the NFL in 2015. Peyton’s uncle, Greg, said:

“I just wanted to let everyone know on Razorback Nation that Peyton is doing better. He’s still in intensive care and having some problems with his kidneys and his lungs but doctors say he is improving.

Adding to this information, I have confirmed Hillis was in a swimming accident in Pensacola, FL and helicoptered to the hospital. He remains unconscious in the ICU.

Family asks to please pray for him and a speedy recovery. https://t.co/bHWdZpJeXq

“He remains unconscious in the ICU.

Peyton Hillis’ uncle posted this on Facebook and @OtisKirk23 brought it to my attention. #WPS pic.twitter.com/jYRvQPGAXF

Some of my little fans back home helping me get my workout done. http://t.co/6M8EW8r