Buffalo Bills Says Damar Hamlin Has Made “Substantial Improvement”: “All cylinders are firing within his brain and he is moving his hands and feet” 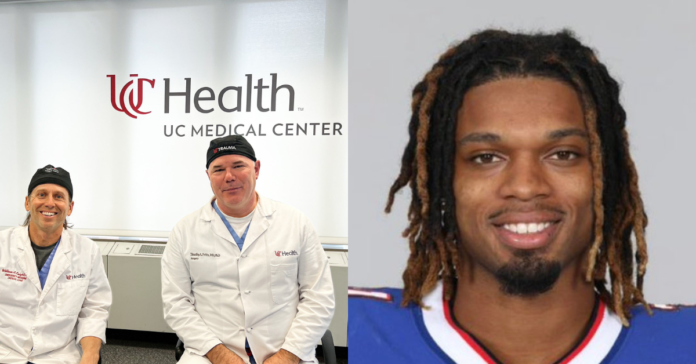 Buffalo Bills gave a heartwarming update on safety Damar Hamlin saying he has made “substantial improvement” in the hospital following his cardiac arrest on Monday. Doctors gave even more good news when they said he is now awake and moving his hands and feet.

Hamlin is not talking yet but he can communicate by shaking his head, nodding, or writing said Dr. Timothy Pritts. Pitts said when Damar woke up he scribbled his first question on a clipboard: “Did we win?” “Yes, Damar, you won. You’ve won the game of life,” Pritts told the NFL player.

Pitts said: “So, we know that it’s not only that the lights are on, we know that he’s home.  And that it appears all cylinders are firing within his brain.”

“It’s amazing to know the impact that this has had on so many people.

“And for Damar to be awake and his mom to be able to share that with him is incredible.

“Glory to God for his keeping Damar and his family in the palm of his hand over the last couple of days.”

Hamlin has made “a fairly remarkable recovery,” medical team says:

Though Hamlin remains in intensive care, he is demonstrating “good neurologic recovery” and is awake and holding hands with family in the hospital, Pritts said Thursday.

Tests to determine cause are ongoing: “This marks a really good turning point in his ongoing care,” Pritts said, but “there are many, many steps still ahead of him.”

Hamlin’s next big milestone will be breathing on his own without a ventilator, said Dr. William Knight, director of emergency medicine.

Tests are still underway to determine the cause of his cardiac arrest, Knight said.

An update we were all hoping for. ❤️💙

“Glory to God for his keeping Damar and his family in the palm of his hand over the last couple of days.”

Conservative Lawyer Makes Bizarre, But Interesting Case For McCarthy as Speaker...Do You Agree?

Prince Harry Says He Killed 25 People In New Book: “They were chess pieces taken off the board, my number is 25”