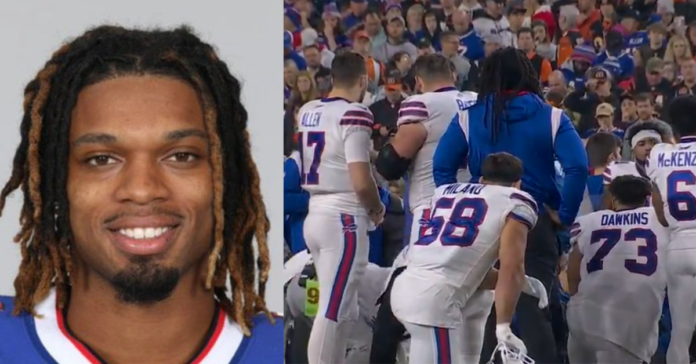 The Buffalo Bills say Damar Hamlin talked to teammates this morning after having his breathing tube removed by doctors. The team said:

“Damar Hamlin FaceTimed into our team meeting today to talk to players and coaches. What he said to the team: “Love you boys.”

‘“Per the physicians at UCMC, Damar’s breathing tube was removed overnight. He continues to progress remarkably in his recovery. His neurologic function remains intact and he has been able to talk to his family and care team.”

NFL reporter Mike Giardi the Bills players had a team meeting today and they surprised the players by bringing Damar in on Facetime.

Girardi said the room exploded and “got to their feet and there was an incredible jolt of emotion and electricity in the room. Damar communicated through gestures mostly but did say ‘Love you boys.’”

Damar Hamlin FaceTimed into our team meeting today to talk to players and coaches.

What he said to the team: “Love you boys.” ❤️ pic.twitter.com/8dorrWNaxt

Coach Sean McDermott said when asked about conversing with Damar Hamlin via Zoom in that team meeting:

“Probably won’t be able to do it justice, honestly, with words.

“To see Damar thru my own eyes is something I’ve been looking forward to.”

McDermott said he gestured to the team, including “flexing.”

NFL Reporter Ian Rapport said: “For the first time, Bills S Damar Hamlin is addressing the team via Facetime. The breathing tube is out, and he’s spent the morning speaking to various teammates on Facetime. Now, he’s delivering a message to the entire group, I’m told.”

“Amazing, to give it context to some extent, Denny is one of our assistant trainers just like anything else, our whole medical team, they go through their mock exercises for things like this but we are never around to see that.

“As they say, practice pays off, and it did in this case, but again the context of it, for an assistant to find himself at that position and needing to take the action he did and step up and take charge like he did, and there were others on the field as well, is nothing short of amazing and the courage that took, you talk about a real leader, a real hero, in saving Damar’s life and just admire his strength.”

What a moment for the #Bills and Damar Hamlin. pic.twitter.com/ISJ1EsiwbH

McDermott said he gestured to the team, including “flexing.” Big smile and chuckle from the coach as he relays that story.