Brian Kemp Overrules California And NCAA: “We’ll make sure fans are able to tailgate, even if it’s at the state Capitol” 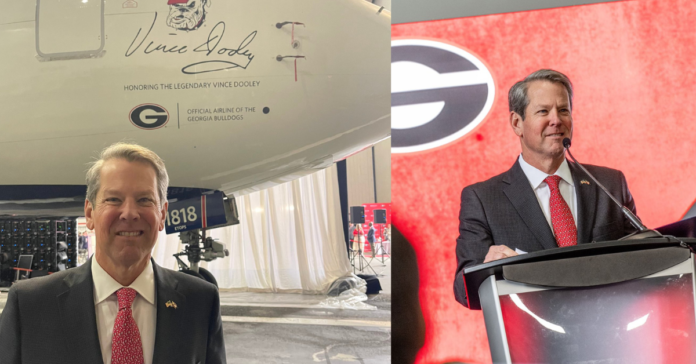 Georgia Governor Brian Kemp overruled The College Football Playoff and the state of California and said he will allow tailgating at next year’s title game even if he has to do it in the state capitol.

Kemp made the statement after the CFP picked Atlanta to host the 2025 CFP National Championship at Mercedes-Benz Stadium. Tailgating is not allowed on-site before to the game between the Georgia Bulldogs and TCU Horned Frogs this year. The game is being played at the SoFi Stadium in Los Angeles, California.

Kemp said: “While California may not know this, in the South a tailgate with friends & family is the only way to prepare for a big game. When Georgia hosts the 2025 #NationalChampionship, we’ll make sure fans are able to tailgate! Even if it’s at the state Capitol!!”

Bill Hancock, Executive Director of the College Football Playoff (CFP) said of selecting Atlanta to hold the game next year:

“We are excited to return the College Football Playoff National Championship to Atlanta.

While California may not know this, in the South a tailgate with friends & family is the only way to prepare for a big game. When Georgia hosts the 2025 #NationalChampionship , we’ll make sure fans are able to tailgate! Even if it’s at the state Capitol!!https://t.co/IHw22tZE6U

“When the playoff was created, the goal was to move the national championship game to ten different communities in the first ten years of the playoff.

“After visiting ten different communities during our first ten years of existence, we accomplished our goal of sharing this celebration of college football with the entire country.

“Bringing the game back to Atlanta was a simple decision when we looked at everything.

“One of our greatest title games took place in Atlanta in 2018, and the city could not have been a better host.

“A state-of-the-art stadium, a walkable downtown with venues to host all the activities surrounding national championship weekend and great people made Atlanta an obvious choice to be the first city to host a second title game,” he said.

Was great talking with @Finebaum yesterday about @GeorgiaFootball, tailgating in the South, memories of the legendary Coach Vince Dooley, and the 1980 #NationalChampionship team. #GoDawgs | #CFBPlayoff

Far-left local prosecutors are failing their constituents and making our communities less safe.

I look forward to working with members of the General Assembly and @ChrisCarr_Ga to address it this session! https://t.co/c9EmuUgI64

During House Speaker Vote Process, Republicans Seem To Have Found A New Home?