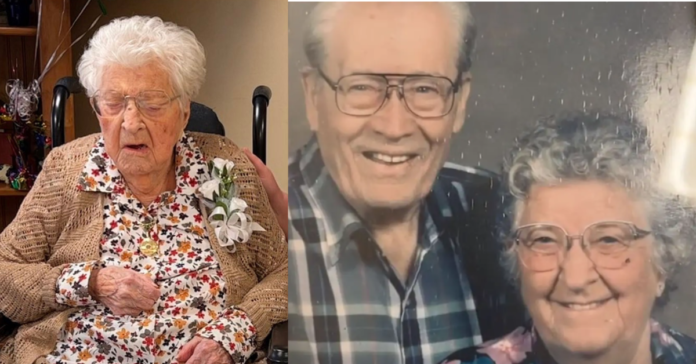 America’s oldest woman has died at 115 after living through 21 presidents, the Spanish Flu, the Great Depression, the sinking of the Titanic, World Wars I and II, COVID.  Bessie Hendricks passed away at the Shady Oaks Care Center in Lake City, Iowa, on Tuesday.

Hendricks celebrated her 115th birthday on Nov. 7. She was listed last year by the Los Angeles-based Gerontology Research Group as the country’s oldest living person and the fourth-oldest person alive worldwide

She raised five children, Shirley, Joan, Roland, Glenda and Leon, two of whom she outlived. She married her husband Paul on June 27, 1930. When she turned 112, Hendricks told the Iowa media the secret to her long happy life: Work hard, stay away from doctors.

She worked an assembly line at a munitions plant filling shells with gunpowder during World War II and taught in a one-room schoolhouse.

Minnie Huster, who has served as the certified dietary manager at Shady Oaks Care Center for 45 years, said when Bessie turned 112:

“Bessie is fun to be around.

Bessie Hendricks of Lake City, IA passed away this wk She was believed 2b the longest living American at 115 yrs old I heard on the news that Bessie said hard work was the secret to her longevity Proud of her Iowa values & remarkable life May God bless the Hendricks family

“Her family makes sure she has a special hat or head band for every holiday and special occasion.”

According to The Fort Dodge Messenger:

Hendricks was born on a farm in Carroll County a few miles southeast of Auburn on Nov. 7, 1907. She was welcomed by her parents, Hugh and Mattie (Clark) Sharkey, along with older siblings John, David, Laurence and Ethel.

At age 5, Hendricks began attending first grade (there was no kindergarten) at the country school across the road from the family’s farm. When she wasn’t in school, she helped with chores at home.

“We kids were always getting into mischief when the folks were gone to town,” Hendricks recalled in her memoirs, which she wrote in 1998-1999 while in her early 90s.

By the time Hendricks entered seventh grade, the local country school was closed to due lack of pupils, so Hendricks attended Central School in Lake City.

A more profound life change would occur, however, when Hendricks’ mother passed away from illness on July 2, 1921. Suddenly 13-year-old Hendricks had to assume many more household responsibilities.

She continued her education, however, and graduated from Lake City High School in May 1926. A little over 90 years later, she attended the all-school reunion in Lake City in the summer of 2016.

“She enjoyed it,” said Glenda Hendricks.

During her high school years, Hendricks completed a normal training course that allowed her to teach country school following her graduation. Starting in the fall of 1926, she taught country school in the Lake City area for four years.

Hendricks had 21 students in school during her first year of teaching.

“That was considered a big country school,” said Hendricks, who noted that some of her older students were nearly her age.

Did she enjoy teaching school?

Just before she started her last year of teaching, Hendricks attended a dance in Lohrville one evening with a friend named Art Hendricks, who had an older brother named Paul.

“While she came to the dance with Art, she left with Paul,” said Hendricks’ daughter, Shirley Hunziker, of Lake City.

The oldest person in the United States, Bessie Hendricks, dies at age 115 in Iowa. pic.twitter.com/BFMQv3nkZm

After Paul and Bessie married on June 27, 1930, at the Woodlawn Christian Church in Lake City, the couple lived in Rands for nearly three years.

In March 1933, the young family moved to a farm east of Lake City that would be the Hendricks’ home place for the next 47 years. The family expanded to include Roland (Ron), Glenda and Leon.

“We worked hard on the farm,” said Bessie Hendricks, whose husband raised crops, hay, cattle and hogs, while she grew a large garden, canned up to 800 quarts of vegetables and fruit a year and served as a 4-H leader.

During House Speaker Vote Process, Republicans Seem To Have Found A New Home?