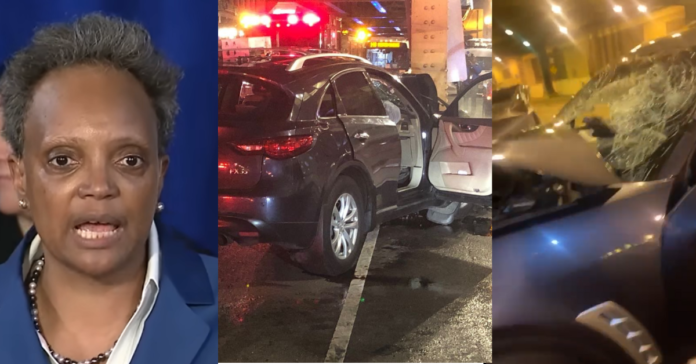 A Chicago carjacker is dead after his intended victim slammed the car into an L-track support beam sending him flying through the windshield. The carjacker’s accomplice, a woman, was injured in the carjacking attempt.

The victim was injured in the crash as well. The Cook County medical examiner’s office identified the deceased man as 18-year-old Elijah Treadwell.

Treadwell and his 16-year-old female accomplice entered an Infiniti FX35 in the 100 block of East Lake and tried to carjack a woman around 5:42 p.m. The victim fought back struggling with the two thugs as the car accelerated into the L support column near Wabash Avenue.

All three were trapped inside the vehicle but witnesses say only half of Treadwell was trapped inside with the other half ejected and sticking halfway out the windshield.

Breaking: Carjacker dead in the Loop tonight after the victim accelerated and slammed into an L track support beam.https://t.co/3pdyWp001c

The vehicle’s owner was listed in stable condition Chicago Police said. Treadwell’s accomplice was taken into custody by Chicago police after being treated at the hospital.

According to The Chicago Sun-Times:

“Chicago fire officials pulled the three from the car and took them to hospitals. The man was pronounced dead at Northwestern Memorial Hospital.

“The women were stabilized at the hospital, officials said.

“The woman with the man was taken into custody and charges were pending, police said.”

“A bystander told me that the vehicle was car jacked and the driver was “f*cked up”. When asked what he meant, he said the driver was partly sticking out of the windshield.”

Scene where would-be carjacking suspect was killed when victim crashed into a CTA beam. pic.twitter.com/eI6Nh6qaZ3

Close look at the vehicle. pic.twitter.com/E0feTqWfoN

1 dead, 2 hurt in crash after carjacking attempt in Loop, via @CSTbreaking here at the @Suntimes. #Chicago #ChicagoScanner https://t.co/xMZfRszrLQ

Back in the 70s, They Knew What The CIA Was Really Up to...and Nobody Listened