Newt Gingrich Tells Joe Biden To Shut His Pie Hole: “We Don’t Need to Be Lectured by Joe” 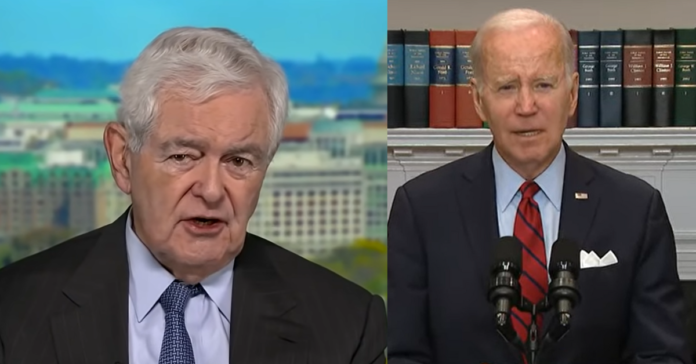 Former Speaker of the House Newt Gingrich fired back at President Biden on Laura Ingraham’s Fox News show after Biden said the GOP Speaker nomination process has been “embarrassing.”

Biden said: “With regard to the fight over the speaker — that’s not my problem. I just think that it is embarrassing the way it has taken so long and the way they are treating one another. And the rest of the world looking, looking at…

“You know, can we get our act together and what I focus on getting things done. This is not a good look. It’s not a good thing. It’s the United States of America. And I hope they get their act together.”

“I think the idea that Joe Biden, who has been lying consistently about his son, who’s gotten rich by means I think are probably illegal, who has never been to the border…you look at his policies, you look at his weakness around the world, I don’t think we need to be lectured by Joe Biden.

“This is a healthy, free Republican Party.

“We’re not the Nancy Pelosi machine.

“We don’t have the culture of the Democrats.

“If you want to be an independent, free-thinking person who has to get up and argue your case, you ought to be Republican.

“If you want to be part of a group that does all you’re told by your boss, you ought to be a Democrat,” he said.

“Most of the things they want are relatively reasonable.

“And that’s part of the legislative process.

“And freedom is messy and sloppy and also remarkable — remarkably creative. We’ll get there, and we’ll have a speaker.”

“The result is going to be​:​ Anybody who tried to replace Kevin would face total chaos​.

“I​t will be impossible to govern.

“So I hope in the next 24 hours that this handful of members will realize they don’t have the moral right to reject the choice of 85% of their conference​,” he said.

Electing a speaker takes time. It is important to remember that it is essential for freedom.https://t.co/4jpxJy09Zm

#OTD in 1933, construction began on the Golden Gate Bridge in the San Francisco Bay. pic.twitter.com/eG61D3AzgP

The Border Is Not Open