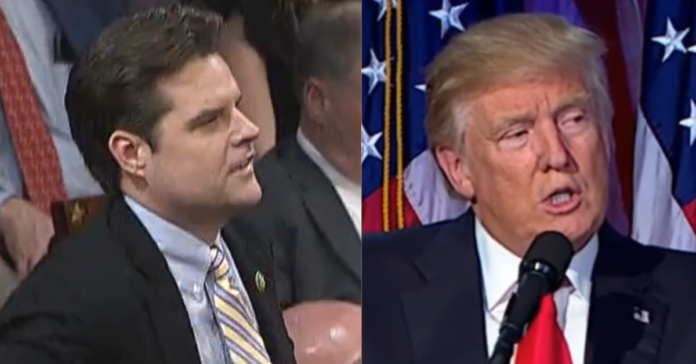 Rep. Matt Gaetz (R-Fla.) added a new name to the fight to be Speaker of the House Thursday, voting for former President Donald J. Trump on the 7th ballot.

Gaetz recently told Fox News that Trump’s support of U.S. House Rep Kevin McCarthy (R-CA) was “sad” but that his vote against McCarthy, who Trump backed, in no way changed his opinion of the former president but he could not pull the trigger for McCarthy.

“This changes neither my view of McCarthy, nor Trump, nor my vote,” Gaetz said at the time. Trump said all will be well despite the fighting because the process is making the GOP stronger:

“I actually think that a big Republican VICTORY today, after going through numerous Roll Calls that failed to produce a Speaker of the House, has made the position & process of getting to be Speaker BIGGER & MORE IMPORTANT than if it were done in the more traditional way.

“Much like me again becoming President after having won big in 2016.”

“This is a break from the unified faction of 20 House Republicans who’d been voting for Rep. Byron Donalds (R-Florida) and blocking GOP Leader Kevin McCarthy from winning the speakership.

“Nothing in the Constitution requires the speaker to be a sitting member of Congress, though that has been the case throughout U.S history.”

My vote for Speaker of the House today?

BREAKING: Matt Gaetz has just voted for President Trump as Speaker of the House

BREAKING: Rep. Matt Gaetz votes for Donald Trump to be speaker of the house. pic.twitter.com/tQ9x46MUe1