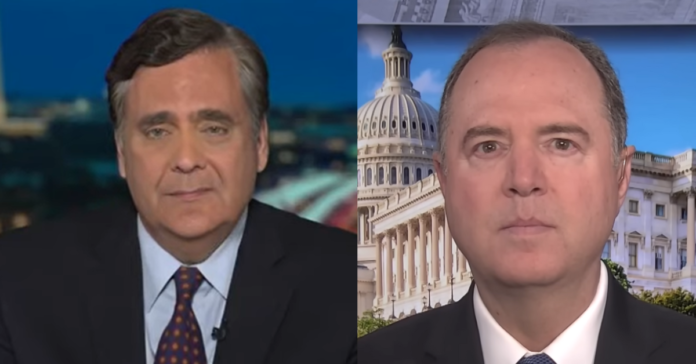 Legal scholar Jonathan Turley could get a job at a branding company if he ever tires of the law after he handed Dem. Rep. Adam Schiff a perfect nickname. Turley was responding to the new Twitter files that show, in writing for all the world to see, that Adam Schiff tried to censor a journalist.

The way Schiff went about it was dubious and insidious and Adam has yet to resign or explain why he violated the US Constitution. Enter Jonathan Turley who dropped the hammer on Adam.

Turley wrote: “In the latest tranche of “Twitter Files,” journalist Matt Taibbi revealed that Twitter balked at Schiff’s demand that Twitter suspend an array of posters or label their content as “misinformation” and “reduce the visibility” of them. Among those who Schiff secretly tried to censor was New York Post columnist Paul Sperry.

“Sperry drew Schiff’s ire by writing about a conversation allegedly overheard by one of his sources. Sperry’s article, which appeared in RealClearInvestigations, cited two sources as overhearing two White House staffers discussing how to remove newly-elected President Trump from office.

“The article raised the possibility of bias on the part of an alleged key player in launching the first Trump impeachment, CIA analyst Eric Ciaramella.

“Rather than simply refute the allegation, Schiff wanted Sperry and other critics silenced. His office reportedly laid out steps to cleanse Twitter of their criticism, including an instruction to “remove any and all content about Mr. Misko and other Committee staff from its service — to include quotes, retweets, and reactions to that content.”

“The date of Schiff’s non-public letter in November 2020 is notable: Earlier that year, I wrote a column for The Hill criticizing Schiff for pushing for censorship of misinformation in a letter that he sent to social media companies.

“His office promptly objected to the very suggestion that Schiff supported censorship.

“We now know Schiff was actively seeking to censor specific critics on social media. These likely were viewed as more than “requests” since Schiff was sending public letters threatening possible legislative action against these same companies.

“He wanted his critics silenced on social media. After all, criticizing his investigations or staff must, by definition, be misinformation — right?

“Not only does it show how dishonest some politicians have been in denying censorship while secretly demanding it, it also shows the insatiable appetite created by censorship. The article in question, written by Sperry, is a good example.

“Sperry has denied ever supporting QAnon conspiracy theories, as Schiff’s office charged. Yet even if Sperry’s account about Schiff’s staffer was wildly untrue, that should make it easier to rebut publicly.

“The move by Schiff to ban Sperry and others on Twitter — and to remove content — is highly ironic. Schiff has been criticized repeatedly for promoting “misinformation” and for relying on unidentified “sources” for his claims of Trump’s criminality.

“Schiff is unlikely to be deterred by the release of these communications. He recently sent a letter to Facebook, warning it not to relax its censorship efforts.

“His letter reminded Facebook that some lawmakers are watching the company “as part of our ongoing oversight efforts” — and suggested they may be forced to exercise that oversight into any move by Facebook to “alter or rollback certain misinformation policies.”

“In a recent tweet, Schiff chastised Musk and demanded more answers from the Twitter CEO. While insisting that “I don’t support censorship,” Schiff asked Musk if he would “commit to providing the public with actual answers and data, not just tweets?” Well, Musk just did precisely that.

“The “actual answer” is that Schiff has long sought to silence his critics, and Musk has exposed the underbelly of censorship — which is where we found Adam Schiff,” Turley wrote.

Musk has exposed the underbelly of censorship — which is where we found Adam Schiff…https://t.co/4LhQOijWN2

…Schiff’s actions embody the slippery slope of censorship. Labeling his critics as QAnon supporters or purveyors of “misinformation,” he sought to have allies in social media “disappear” critics like Paul Sperry-yet he found that even those allies could not stomach his demands.

Dan Crenshaw Makes His Biggest Online Political Blunder Yet, and Boy Does He PAY For it...

Newt Gingrich Tells Joe Biden To Shut His Pie Hole: “We Don’t Need to Be Lectured by Joe”