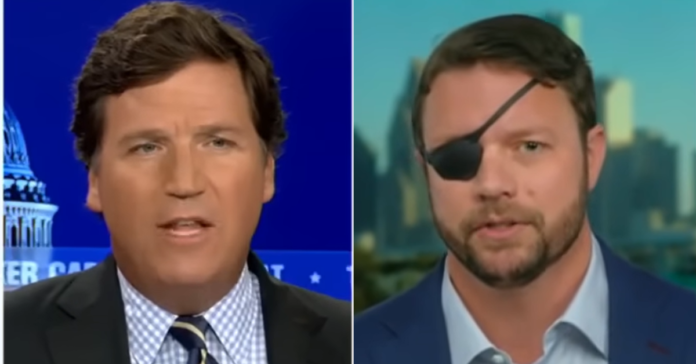 Tucker took Crenshaw to the woodshed and detailed how ridiculous but not uncommon it is for neocons and Democrats to portray anyone who disagrees with them as enemies and terrorists.  Tucker said:

“They have real concerns, real issues.

“Instead he impugned their motive, their character, their intelligence, their moral standing.

“Now, what you just saw as Dan Crenshaw just spoke, is the snarling face of the donor class revealed for all to see, finally.

“He went on CNN to call his opponents ‘enemies of the state.’ What you just saw is the snarling face of the donor class.”pic.twitter.com/UZOTKf3GeN

“The deep loathing of disobedient voters that may be their most passionate secret emotion.

“But they’re not bothering to hide that emotion anymore.

“Now you know how they really feel.”

Crenshaw is jealous because McCarthy will cave, this backroom dealing for Speaker is as old as the Republic, giving Matt Gaetz and others what they want.

“Now, the fact that this race has not been settled by now is being described, especially online by many, as embarrassing – and it is embarrassing if you prefer the Soviet-style consensus of the Democratic Party’s internal elections, where votes are merely a formality and all the really big decisions, the meaningful ones, are made years in advance by donors. Oh, of course, everyone’s on board. That’s what they do.

“But if you prefer democracy to oligarchy, if you prefer real debates about issues that actually matter, it’s pretty refreshing to see it. Yes, it’s a little chaotic, but this is what it’s supposed to be.

“Now, we’re going to give you a lot more to tell them what’s happening in just a minute and throughout the week, but first, a quick overview to frame the big points.

“Now they stopped him because they decided that Kevin McCarthy is not conservative enough to represent a party that’s just taking back the House from Nancy Pelosi. and they are definitely right about that.

“McCarthy is not especially conservative. He is, in fact, ideologically agnostic. He’s flexible. His real constituency is the lobbying community in Washington. So, if you’ve got sincere political beliefs, that is infuriating to watch.

“On the other hand, to be fair, this is politics and McCarthy does have strengths. It’s not easy being speaker when the House is this closely divided. and in some ways Kevin McCarthy is perfectly suited for that.

“To win them back, McCarthy is going to have to give them something real, not more airy promises, which he specializes in.

"He Went 9 Minutes Without Breathing"...