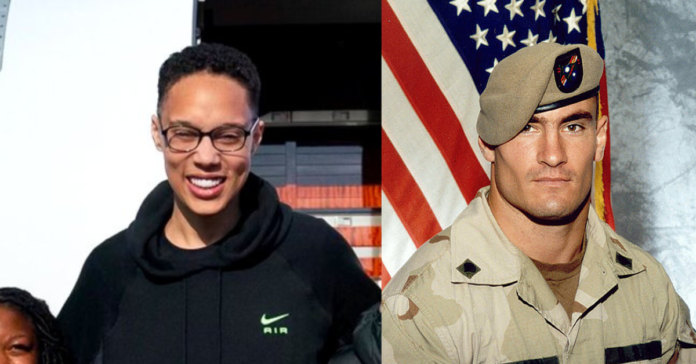 Brittney Griner won an award once given to American hero Pat Tillman and not everyone is pleased with the decision by The Arizona Republic, a Gannett Company.  The award, ‘Arizonan of the Year,’ was awarded to Tillman in 2004 and to say the standard for the award has fallen is an understatement.

The Arizona Republic said: “Today we name Brittney Griner “Arizonan of the Year” because no other Arizona newsmaker in 2022 captured the public eye as intensely as she did. Nor has anyone’s story in this state aroused the kind of fear and foreboding that hers had for nearly 300 days.

“Many have argued that Griner had no one to blame but herself for her predicament – that she broke Russian law and now would pay the consequences.

“Those people fail to understand the essential nature of Vladimir Putin and the Russian justice system.

“If the Russians were taking one of the world’s great athletes prisoner a week before their invasion, we think that wasn’t likely a coincidence.

“When the Russians announced the bazaar is open and Griner could be had for a price, well, there’s a name for that kind of behavior. We call it hostage-taking.

“…Some conservatives remembered that Griner had called on her own Phoenix Mercury team in 2020 to stop playing the national anthem.

“We would remind those critics that she did that during a cultural awakening in which African Americans were drawing attention not only to the modern mistreatment of their people but the atrocities committed over centuries against them.

“We would have encouraged her to take her new freedom and use it to help draw attention to other American hostages in Russia, including Paul Whelan and Marc Fogel.

“But such is her character, she had already begun doing that in her correspondence to President Joe Biden while still a prisoner in Russia.

“Her statement upon her release underscored that commitment:

“President Biden, you brought me home and I know you are committed to bringing Paul Whelan and all Americans home too.

“I will use my platform to do whatever I can to help you. I also encourage everyone that played a part in bringing me home to continue their efforts to bring all Americans home. Every family deserves to be whole.”

It’s not out of any personal valor or past achievement that we name Brittney Griner “Arizonan of the Year,” but as a solitary person who got caught in the tectonic shifts of history and became our state’s most important newsmaker in 2022,” they wrote.

The Arizona Republic just awarded Brittney Griner their ‘Arizonian of the Year’ award.
The award had previously gone to people like late hero Pat Tillman. What a mess we are in….

Brittney Griner captured the public eye more intensely than anyone else in 2022, an impact that makes her our Arizonan of the Year. https://t.co/zd2ojgJkh4