There’s something really rotten in The Swamp. It stinks so bad, it’s outdoing all the other rot in that filthy city. This latest rotten scandal involves a likely fed informant by the name of Ray Epps, who was on video many times “inciting” a riot on January 5th and 6th and even sent his family a text message telling them he was on the “front lines” and “orchestrating” it. Here’s a text Ray Epps sent his nephew on 1-6-21: “I WAS IN THE FRONT WITH A FEW OTHERS. I ALSO ORCHESTRATED IT.”

Below is a transcript from the J6 Committee. Interesting how this didn’t make the prime-time show trial on all the networks, right?

Nope, this was kept hidden… 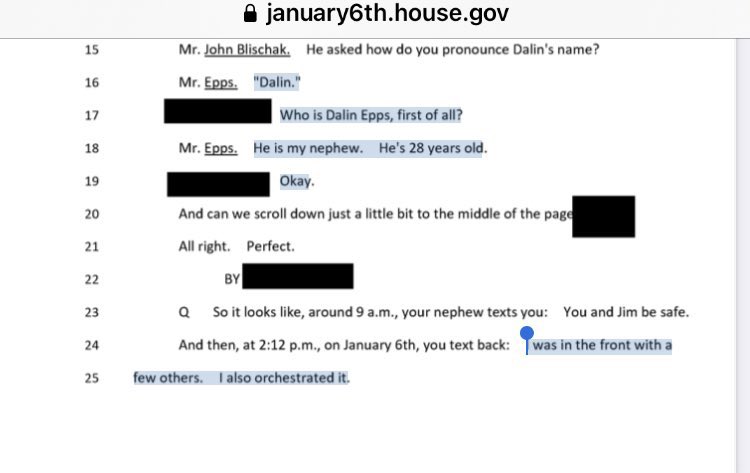 As I mentioned above, several videos back up Mr. Epps’ claim that he was running the show. So, this isn’t a case of some braggart old man, just trying to show off for his nephew.

Here is Ray Epps in all of his “insurrection glory.” And oddly enough, he’s the ONLY January 6th “character” who Adam Kinzinger will twist himself in a pretzel to defend.

This is the only Jan 6 participant Adam Kinzinger will defend!

There are so many videos of this guy, it’s absurd:

This guy was like the “cruise director” of the J6 “insurrection,” trotting around like a dancing bear, trying to get everyone involved… https://t.co/NIrAuLlvAM

I stumbled upon a thread that actually highlights how Kinzinger and Schiff, treat Epps as if they’re his legal team, and are there to coach and defend him.

This thread comes from Twitter user Jason Beale. It’s very good and well worth the read.

Halfway through the Ray Epps interview transcript and holy shit @RepKinzinger and @RepAdamSchiff need to explain what motivated them and staff to question him like defense lawyers questioning their client. If the reason ISN’T that he was working for a government agency then…

…whatever the other reason is must be a fucking doozy, because they repeatedly lead him away from danger and into the most implausible excuses and explanations of his actions. Once they lead him to the answer they need on the record to keep him out of trouble, they…

…immediately accept it, however implausible and begging for objective follow-up, and move on to the next “right wing talking point” they need him to find a way to rebut. Epps out on the street Jan 5th telling everyone he may get arrested for saying it but everybody needs to…

…”go into the capitol tomorrow”? Epps’ explanation: Oh I was just trying to calm everyone down. Probably shouldn’t have said it but I’m the kind of guy who likes to make sure everyone’s safe. Kinzinger and Co.: Roger that – moving on… Oh hey, and that phone call…

…Epps received earlier on Jan 5th from that guy he met one time at a VFW in Arizona but didn’t really remember who happened to be in DC as well and Epps agreed to go to dinner with despite having no idea who he was? Epps said he thought his name was Carver or something? And…

…nobody on the committee – not a soul – wanted to ask Epps why he’d meet a stranger for dinner or what they talked about or why Paul Carver was in DC – you know, basic interrogatives? Is it this Paul Carver?

…describes his presence as a last minute decision) and thought it important enough to reach out to him to arrange a meeting over dinner to discus…what? The weather back in AZ? That one time they bonded over bingo at the VFW? What could possibly keep an investigative…

What could possibly keep an investigative…

…committee urging the DoJ to arrest and convict everyone who sniffed the air inside the “barricades” on the capitol grounds from exploring Epps’ dinner conversation with Paul Carver? Look at the transcript – not a single question.

I’ve got a lot more to say about this truly remarkable interview – need to read the second half (maybe they revisited Carver at the end?) and will add to his thread later tonight or tomorrow.

Update: Finished reading the transcript. At the very end they revisit Paul Carver and ask Epps if he’s aware of any affiliation with 3%-ers and what they discussed at dinner. Epps’ response – without challenge or follow-up – (paraphrasing) “Nope, not aware of anything like that..

…and we just engaged in ‘surface talk, you know, how’d your day go, that kind of stuff. Got to know each other.’” Again, despite the fact that the Paul Carver story makes no sense whatsoever and is screaming for attention, his answers are eagerly accepted and they move on.

Halfway through the Ray Epps interview transcript and holy shit @RepKinzinger and @RepAdamSchiff need to explain what motivated them and staff to question him like defense lawyers questioning their client. If the reason ISN’T that he was working for a government agency then…

None of this makes any sense on the outside, does it? I mean, it makes a helluva lot of sense if you take into consideration that Epps was likely a fed informant on some level, and is being protected by the J6 committee because this whole thing was a well-orchestrated setup.

Honestly, that’s the only way you can look at what’s unfolding right now and draw any reasonable conclusion.

And speaking of common sense, Human Events Editor Jack Posobiec actually summed this up in one brilliant tweet that I think will help everyone really the bigger plot that’s unraveling.

Here’s what Jack said in his tweet: “Ray Epps is on video directing people to attack the Capitol. Ray Epps texted his nephew “I orchestrated it” But if they charged him with incitement, they couldn’t indict Trump, so they protected Epps. Are you getting it yet?”

Ray Epps is on video directing people to attack the Capitol

Ray Epps texted his nephew “I orchestrated it”

But if they changed him with incitement, they couldn’t indict Trump, so they protected Epps

Are you getting it yet?

Yep. He nailed it. You can’t have a man out there inciting a literal “insurrection” on his own when you are accusing President Trump of leading the whole thing. I gues if they took Epps down, the guy who admits to “orchestrating” it in text, and can be seen and heard orchestrating it on video, the committee and law enforcement would have to connect Epps and Trump.

I can tell you one thing, we’d find out who Epps was actually connected to, wouldn’t we?