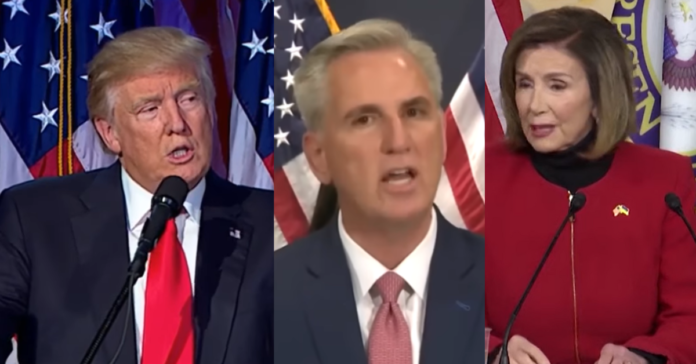 Former President Donald Trump broke his silence on the Republican power struggle and urged the GOP to get ‘take the victory and watch crazy Nancy fly back home’ by electing Kevin McCarthy as the next speaker.

Trump said: “Some really good conversations took place last night, and it’s now time for all of our great republican house members to vote for Kevin, close the deal, take the victory.

“And watch crazy Nancy Pelosi fly back home to a very broken California, the only speaker in U.S. history to have lost the “house” twice. Republicans, do not turn a great triumph into a giant and embarrassing defeat.

“It’s time to celebrate, you deserve it.

“Kevin McCarthy will do a good job, and maybe even a great job – just watch.

“If republicans are going to fight, we ought to be fighting Mitch McConnell and his domineering, China loving boss, I mean wife.

“The harm they have done to the republican party is incalculable.

“Today, he couldn’t be elected “dog catcher” in Kentucky (sadly, he only won because of my endorsement, went up 21 points – sorry!).

“Take the victory and run,” he said.

Fox News spoke to Mat Gaetz one of the GOP holdouts to see if Trump’s statement changed his mind.

Gaetz told Fox News Digital that Trump’s endorsement of McCarthy for speaker has not changed the congressman’s view on the former president or GOP leader, nor has swayed his vote.

“Sad!” Gaetz said in a Wednesday statement. “This changes neither my view of McCarthy nor Trump nor my vote.”

There are active discussions among McCarthy allies about adjourning House til tomorrow but problem is they may not have the votes to do it. Dems likely to whip against it, per sources, and some Rs may vote no. That means fourth ballot vote could happen at noon — key moment for KM

🚨 NEWS: I just spoke to TRUMP

He said it’s time to cut a deal to make MCCARTHY speaker.

PLUS: The latest on Rs adjourning@PunchbowlNews SPECIAL EDITION OUT NOW … https://t.co/AbzvATQvLe

Supporting McCarthy Is Sad; Your Support For Him Won't Change Our Vote