Matt Gaetz Overrules Trump, Sinks Kevin McCarthy For Fourth Time: “This changes neither my view of McCarthy nor Trump nor my vote” 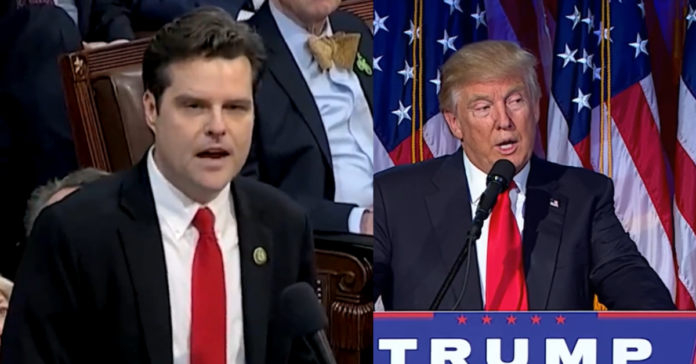 “Some really good conversations took place last night, and it’s now time for all of our great republican house members to vote for Kevin, close the deal, take the victory. It’s time to celebrate, you deserve it. Kevin McCarthy will do a good job.

Gaetz said in a Wednesday statement before the vote that disagreeing with Trump does not change his view of the GOP presidential candidate but he won’t back Kevin. “This changes neither my view of McCarthy nor Trump nor my vote.”

The fourth vote is underway and Matt and his voting block held firm and blocked McCarthy from taking the gavel.

Another big fat L for Kevin McCarthy, he is now 0-4.

Kevin McCarthy will NEVER be Speaker of the House.

“We have been in negotiations with Kevin McCarthy since the summer. Unfortunately, in the summer when those negotiations began, we were not taken seriously because our votes didn’t seem to matter as much as they do in this slim majority now.

“It was very common sense things like putting forward a border security bill, putting forward a term limits bill.  Having a measure in place to where any member of Congress who offers an amendment to reduce the federal debt – well, that’s made in order.

“There was nothing that we proposed that is unattainable for him. And with the single-member motion to vacate, this has worked in the House of Representatives for nearly two centuries.

“Nancy Pelosi was the very first Speaker of the House to remove this check and balance that members have on the third in line to the presidency of the United States.”

Roy says “most importantly” Donalds is a family man.

Roy says “most importantly” Donalds is a family man.

AOC Issues Warning To Republican Party: "Could we get Democratic chairs of committees as a result of a coalition government”