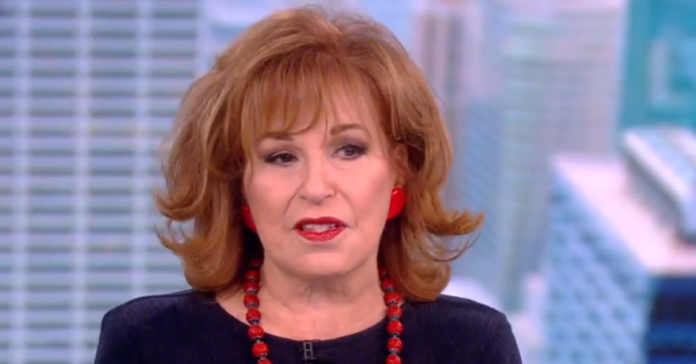 “The View” co-hosts were discussing Buffalo Bills player Damar Hamlin, who collapsed during a game Monday night and suffered cardiac arrest, when Joy Behar took the opportunity to trash conservatives and heterosexual men because they like the sport.

Co-host Sara Haines said: “I grew up, and football was just the norm. My parents went to the games long after we were even in high school because the whole town did. I loved ‘Friday Night Lights,’ et cetera, et cetera.

“What it might change is people that have kids coming up because like me, you even wouldn’t have known all the damage that could be done now,” she said of the shocking injury suffered by Hamlin.

“Right now, they got him on a ventilator, so they’re trying to get him to breathe on his own.

“So, we’re just kind of taking it day by day. Still in the ICU.

“They have him sedated, so just continue to administer the medical treatment that they’ve been doing.”

Joy took a swipe at the GOP over the Speaker vote saying:

“I had a little what they call schadenfreude watching this. I sort of enjoyed that they’re in such disarray because they deserve it.

“It was nice they took a break from destroying the country and started to turn on each other.

“I was reading one time about turtles one time, and apparently if you have turtles in an aquarium and then you don’t feed them long enough, they will start to eat each other.

“And I’m not just talking about Mitch McConnell when I talk about turtles here.

“I’m talking about all of them,” she said.

NFL’S HAMLIN REMAINS IN CRITICAL CONDITION: Fans watched in horror when Damar Hamlin collapsed after a hit to the chest caused him to go into cardiac arrest — #TheView co-hosts weigh in on the renewed calls for the NFL to make safety a bigger priority. https://t.co/cVclFZQmjA pic.twitter.com/6dmkZGpn1I