Former NFL Player Sends Heartbreaking Text to Journalist, Fears He Will Be Next to “Die Suddenly”

What happened on live TV during Monday Night Football has spooked a lot of people. The world was watching when a 24-year-old NFL player collapsed on the field from a massive heart attack. He’s clinging to life in the hospital, but sadly this is yet another sad story about someone young and seemingly healthy “dying suddenly.” This is happening a lot. Many athletes have collapsed and died suddenly since the vaccine came out.

Yes, there are always injuries and such in sports, but there is data out there showing that there’s a very huge “increase” in cardiac arrests since the vaccine came out.

Dr. McCullough actually did some research.

To break this down: 1.598 athletes suffered cardiac arrest since the vaccine came out. But between the years 1966-2004, a total of 1.101 athletes had cardiac arrest. That’s 1,101 over a 38-year time-span vs nearly 1600 in about two years. That’s a massive increase, and there is NOTHING wrong with wanting this horrific new “phenomenon” investigated.

This recent paper from Dr. Polykretis and myself gets the sharp rise in athlete deaths into PUBMED. Since vaccination, “1598 athletes suffered cardiac arrest, 1101 of which with deadly outcome. Over a prior 38-years (1966-2004), 1101 athletes < age of 35 died (~29/yr). https://t.co/lGWFctLx2L pic.twitter.com/SCieZTsoNZ

And trust me, this is not just “conspiracy kook” stuff. Everyone is scared, namely, the folks surrounding the NFL. One former player even reached out to his journalist friend with a heartbreaking text about this issue.

Rogan O’Handley is a former Hollywood entertainment lawyer turned conservative commentator and independent journalist. He shared the message that was sent to him by a former NFL player, and it shows that there is a lot of fear out there amongst the players, who know something isn’t right.

Here’s what Rogan said in his tweet: “Today I received this message from a former NFL player So many current & former players are scared of what this vax is doing to their friends & they’re not allowed to discuss it publicly I promised him I would be his voice But my God what is happening to us This is horrible”

Today I received this message from a former NFL player

I promised him I would be his voice

But my God what is happening to us

Here’s a closeup of the text message he received: 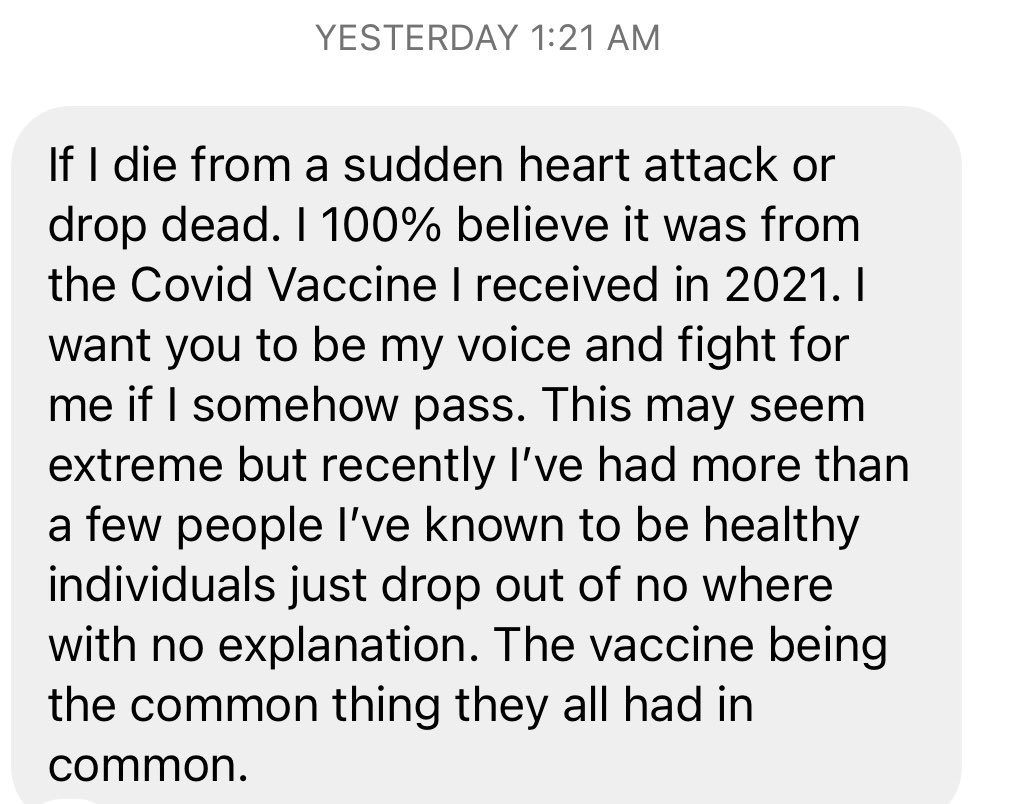 You can literally hear the fear in that message, and it’s so sad. And for some odd reason, we’re not allowed to talk about it.

Back during the 70s when the Swine flu hit, and they rolled out the vaccine, about 100 people died suddenly and they yanked that thing off the shelves and began investigating.

My question is, why aren’t they doing that now? What changed?