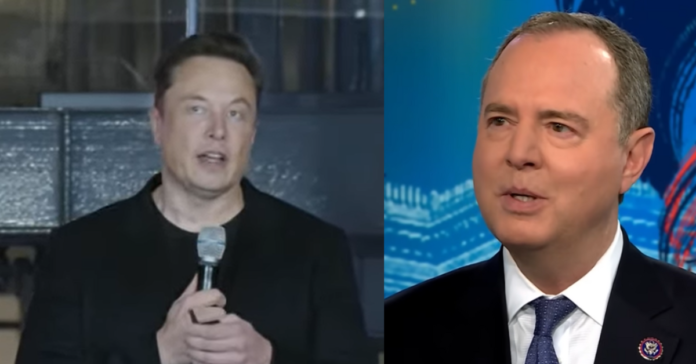 Elon Musk released the next installment of the Twitter files via reporter Matt Taibbi and he caught Adam Schiff, or someone in his office throwing around his name, in the act of trying to get a reporter censored. Matt wrote:

“In February, 2020, as COVID broke out, the Global Engagement Center – a fledgling analytic/intelligence arms of the State Department – went to the media with a report called, “Russian Disinformation Apparatus Taking Advantage of Coronavirus Concerns.

“The GEC flagged accounts as “Russian personas and proxies” based on criteria like, “Describing the Coronavirus as an engineered bioweapon,” blaming “research conducted at the Wuhan institute,” and “attributing the appearance of the virus to the CIA.”

“State also flagged accounts that retweeted news that Twitter banned the popular U.S. ZeroHedge, claiming the episode “led to another flurry of disinformation narratives.” ZH had done reports speculating that the virus had lab origin.

“The GEC still led directly to news stories like the AFP’s headline, “Russia-linked disinformation campaign led to coronavirus alarm, US says,” and a Politico story about how “Russian, Chinese, Iranian Disinformation Narratives Echo One Another.”

“…Twitter was also trying to reduce the number of agencies with access to Roth. “If these folks are like House Homeland Committee and DHS, once we give them a direct contact with Yoel, they will want to come back to him again and again,” said policy director Carlos Monje.

“When the State Department/GEC – remember this was 2020, during the Trump administration – wanted to publicize a list of 5,500 accounts it claimed would “amplify Chinese propaganda and disinformation” about COVID, Twitter analysts were beside themselves.

“The GEC report appeared based on DHS data circulated earlier that week, and included accounts that followed “two or more” Chinese diplomatic accounts. They reportedly ended up with a list “nearly 250,000” names long, and included Canadian officials and a CNN account:

“Roth saw GEC’s move as an attempt by the GEC to use intel from other agencies to “insert themselves” into the content moderation club that included Twitter, Facebook, the FBI, DHS, and others:

“IT MAKES SENSE TO PUSH BACK ON GEC PARTICIPATION IN THIS FORUM” When the FBI informed Twitter the GEC wanted to be included in the regular “industry call” between companies like Twitter and Facebook and the DHS and FBI, Twitter leaders balked at first.

“Facebook, Google, and Twitter executives were united in opposition to GEC’s inclusion, with ostensible reasons including, “The GEC’s mandate for offensive IO to promote American interests.”

“Eventually the FBI argued, first to Facebook, for a compromise solution: other USG agencies could participate in the “industry” calls, but the FBI and DHS would act as sole “conduits.”

“Roth reached out to Chan with concerns about letting the “press-happy” GEC in, expressing hope they could keep the “circle of trust small.”

“STATE… NSA, and CIA” Chan reassured him it would be a “one-way” channel, and “State/GEC, NSA, and CIA have expressed interest in being allowed on in listen mode only.”

““WE DON’T DO THIS” Even Twitter declined to honor Schiff’s request at the time. Sperry was later suspended, however.”

26.Requests arrived and were escalated from all over: from Treasury, the NSA, virtually every state, the HHS, from the FBI and DHS, and more: pic.twitter.com/QYJBjPEJZW