AOC Issues Warning To Republican Party: “Could we get Democratic chairs of committees as a result of a coalition government” 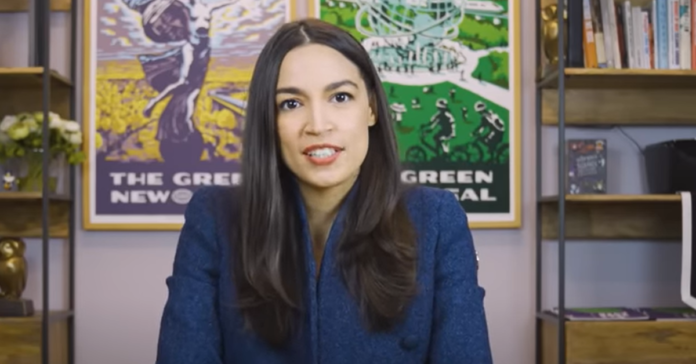 Rep. Alexandria Ocasio-Cortez, D-N.Y. warned the Republican Party she may back a “coalition government” in the House of Representatives where the Dems may get “chairs of committees” if they make a deal with McCarthy to hand him the Speaker job.

AOC said: “I do not believe that Kevin McCarthy has the votes. I believe that a lot of the opposition to him is very personal. I believe his leadership style is incompatible with a lot of Republican members and certainly the Democratic Caucus.

“So the question is, is there anyone in their caucus that can build that consensus? If there isn’t, McCarthy’s team may have to come to the Democratic Party? And, if that’s the case, then what would that even look like. It’s rather unprecedented? Could it result in a potential coalition government?

“Could we get Democratic chairs of committees as a result?

“I’m not saying necessarily that our party is signaling an openness just yet.

“But, really, it’s about the cards that are in McCarthy’s hands.

“And if he chooses to approach the Democratic Caucus, then that would be a negotiation, in and of itself, for a potential coalition government.

“But, again, this is very much an unprecedented time.”

“There is a very interesting quandary that Kevin McCarthy is in.

“He needs to get these votes somewhere if he wants to be speaker, and if he can’t get those votes from the House Freedom Caucus, he’s not going to become speaker.

“Unless, he approaches the Democratic Party in order to enter into some negotiation.

Trump urged the GOP to back Kevin saying: “Some really good conversations took place last night, and it’s now time for all of our great republican house members to vote for Kevin, close the deal, take the victory.

“And watch crazy Nancy Pelosi fly back home to a very broken California, the only speaker in U.S. history to have lost the “house” twice. Republicans, do not turn a great triumph into a giant and embarrassing defeat.

“It’s time to celebrate, you deserve it.

“Kevin McCarthy will do a good job, and maybe even a great job – just watch.

“If republicans are going to fight, we ought to be fighting Mitch McConnell and his domineering, China loving boss, I mean wife.

“The harm they have done to the republican party is incalculable.

“Today, he couldn’t be elected “dog catcher” in Kentucky (sadly, he only won because of my endorsement, went up 21 points – sorry!).

“Take the victory and run,” he said.

AOC: I think what was important today was to send the message that we were united and that there would be no defections, that Democrats are here, we are not going anywhere — and if they want to play ball, we are open to that. pic.twitter.com/ECKHMOcIua

Matt Gaetz Overrules Trump, Sinks Kevin McCarthy For Fourth Time: "This changes neither my view of McCarthy nor Trump nor my vote"