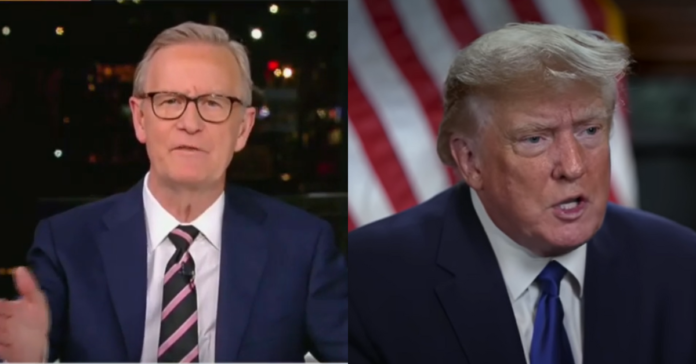 Fox & Friends host Steve Doocy claimed he heard from members of the House Freedom Caucus that former President Donald Trump is in the mix to be speaker of the House if McCarthy can’t wrangle the remaining votes needed to become Speaker.

Doocy said at one point during the broadcast, “Stay tuned because Kevin McCarthy does have a majority of a majority. But the House Freedom Caucus, they’re talking about Steve Scalise and Donald Trump. So stay tuned.

“You do not have to be a sitting congressman to be the speaker of the House.” He then interviewed caucus Chairman Rep. Scott Perry who did not say picking Trump was impossible.

STEVE DOOCY: I’ve heard that expression. So, Congressman, I’ve heard from people in the House Freedom Caucus that they like the two names out there, Steve Scalise and Donald Trump.

REP. SCOTT PERRY: Well, I’m sure we do like it, but I don’t think they’re the right people for speaker.

They may be, but we should have a conversation.

But here we are, at this very moment, because the one guy that could make all the difference refuses to make any of these changes.

STEVE DOOCY: So even though all that stuff you have said, you just said, is it a possibility you could still vote for Kevin McCarthy today?

A little after noon?

Lauren Boebert and a few others will not vote for McCarthy. She said:

“As it stands, I will not be voting for Kevin McCarthy to be Speaker of the House.

“So now, here we are, being sworn at instead of sworn in and we could have had this solved months ago.

“I have been working every day to unify the Republican party for the American people and yesterday we had a deal that was not a selfish deal in any way for Kevin McCarthy to give him the gavel on the first ballot and he eagerly dismissed us.”

As it stands, I will not be voting for Kevin McCarthy to be Speaker of the House. pic.twitter.com/rUDuHS45hH