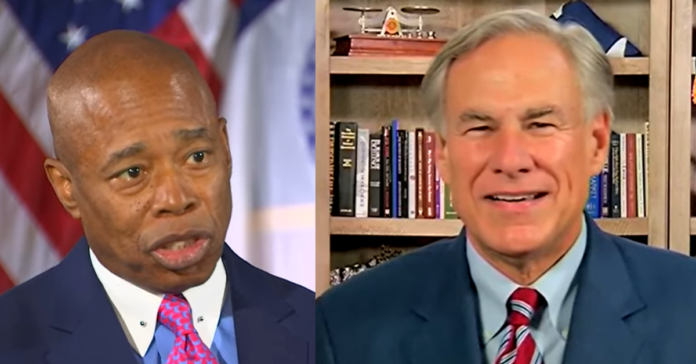 New York City Mayor Eric Adams threw in the towel over the immigration crisis overwhelming the Big Apple calling it a “real embarrassment on a national level.”

He then handed a huge victory to Texas Governor Greg Abbott saying his city, a sanctuary city, needs a solution because “there’s no more room at the inn.” He added that he is in a tight spot because he is ‘compelled by local laws to provide shelter.’

Speaking on WABC’s “Sid & Friends in the Morning” Adam said: “It’s a real embarrassment, I believe, on a national level, and we must have an appropriate response. We have had conversations around the issues on migrants for decades.

“This is a Biden issue, a Democrat issue that now folks like you have to deal with. To be specific and fair, that’s just the truth.”

Adams said: “Well, when we think about the immigration reform, we’re going to need the help from Congress as well.

“I think the president has an obligation to deal with the immediate concerns.

“But when we talk about immigration, it is going to take a combination of the executive and the legislative body.

“We have to address this.

“El Paso should not be going through this.

“Chicago should not be going through this.

“There’s no more room at the inn, but we are compelled by local laws here that we must provide shelter and continue to move in the right direction,” he said.

“We received over 30,000 asylum seekers that are in need of not only shelter, but food, education for children, health care and some of the basic items that are needed,” he added.

“Now, we were notified yesterday that the governor of Colorado has now stated that they are going to be sending migrants to places like New York and Chicago.

“This is just unfair for local governments to have to take on this national obligation. We’ve done our job,” he said.