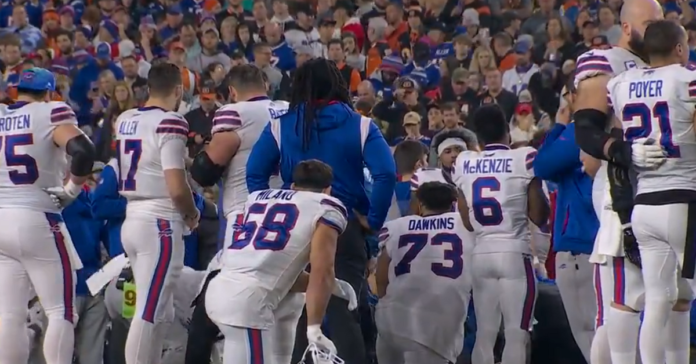 Bills safety Damar Hamlin collapsed on the field during tonight’s football game, was administered CPR on the field for nine minutes, and then was taken by ambulance to a local hospital. He is in critical condition.

The NFL postponed the game between Buffalo and the Cincinnati Bengals.“No one’s been through this,” ex-NFL quarterback Troy Aikman and current ESPN announcer said. “I’ve never seen anything like it, either.”

After about 21 minutes, officials temporarily suspended the game. Just before 10 p.m., the game was officially postponed.

“Our thoughts are with Damar and the Buffalo Bills,” the NFL said. “We will provide more information as it becomes available.

A tweet from the Pitt football account was simple and clear: “Damar Hamlin is the best of us. We love you, 3. Praying for you.”

Let’s take a break and watch a clip of Damar Hamlin giving his family some love just prior a game.

This is what needs to be seen right now.

I am told that Damar Hamlin has been intubated and is currently listed in critical condition. @fox19

"We Think We Have Our Guy"