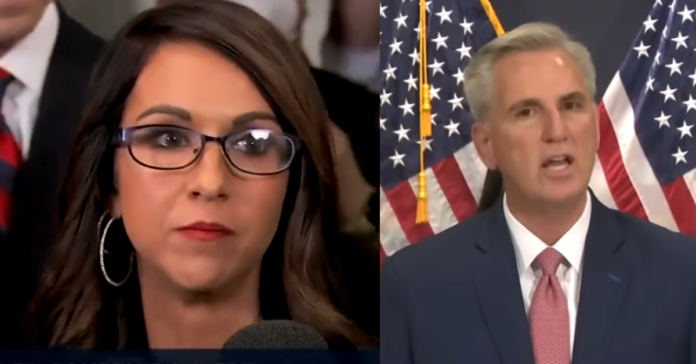 Kevin McCarthy has lost the vote for Speaker. This is the first round of voting so McCarthy is not dead in the water. But with a revolt from the Freedom Caucus, who have at least 9 defectors which is enough to block McCarthy it doesn’t look good for Kevin.

In the second round of voting anything could happen. A non-member like Lee Zeldin or even former President Donald Trump may be picked for the role. Lee Zeldin received at least one vote in the first round.

Lauren Boebert and a few others will not vote for McCarthy. She said: “As it stands, I will not be voting for Kevin McCarthy to be Speaker of the House.

“So now, here we are, being sworn at instead of sworn in and we could have had this solved months ago.

“I have been working every day to unify the Republican party for the American people and yesterday we had a deal that was not a selfish deal in any way for Kevin McCarthy to give him the gavel on the first ballot and he eagerly dismissed us.”

“In his 14 years in Republican Leadership, McCarthy has repeatedly failed to demonstrate any desire to meaningfully change the status quo in Washington.

“There’s times we’re going to have to argue with our own members if they’re looking at for only positions for themselves, not for the country.

BREAKING: Kevin McCarthy is poised to lose the first vote for speaker, likely sending the House to a second ballot for the first time since 1923. https://t.co/bpRuMexRjG