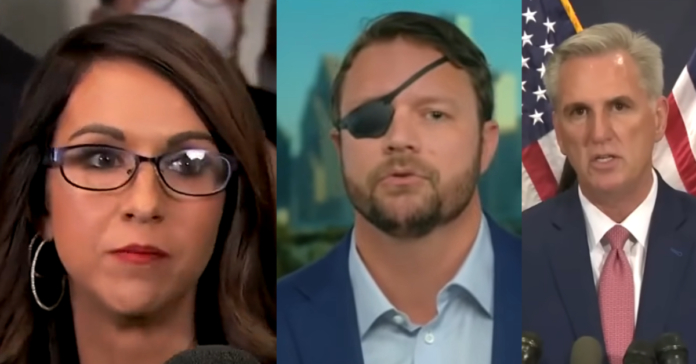 CNN Congressional correspondent Manu Raju gave some behind the scenes details of a closed-door meeting where Rep. Kevin McCarthy tried to keep his dream alive of being Speaker of the House. McCarthy does not have the votes and went at it with GOP members who refuse to back him.

MANU RAJU: We’re hearing things are getting very heated behind closed doors. Kevin McCarthy is essentially done, he’s signaling, with negotiating with his bloc of conservatives who are seeking a number of concessions to weaken the speakership, to empower them.

He said he’s gone so far and they have refused to get to yes, he’s raising his voice. He’s detailing everything that he has done. And he said, quote, “I have earned this job.”

Now, he is also getting some pushback in the room, we are told from both, our sources are telling our Capitol Hill team here that Lauren Boebert, the Colorado Republican congresswoman, said “Bullsh*t” in response to what Kevin McCarthy said.

Now, the one one aspect of that here is Kevin McCarthy is saying he is not going anywhere.

If he does not get 218 votes on that first ballot at noon today. He’s going to grind it out. He said that he’s going to fight this going forward.

And one of his allies, Congressman Dan Crenshaw, said those bloc of hardliners are not going to dig in as long as they are. He said they are, the McCarthy supporters are going to be more stubborn when it comes to this vote on the House floor. Listen.

DAN CRENSHAW: This handful of members is very clearly looking for notoriety over principle, and that’s what it is.

And anyone who suggests differently is in some kind of make believe fantasy. That’s not true. They lost those debates.

That should have been the end of it because that’s how a team works. You pass this stuff, I figure it out, and then you move on.

We will not vote for anyone else.

Obviously they won’t. But it’s going to so much worse than that.

You know, they are enemies.

They have they have made it clear that they prefer a Democrat agenda and a Republican.

MANU RAJU: But right now, those conservative hardliners are not going anywhere. They say they have the votes to deny McCarthy the speakership. They’re not moving off of it.

And in response, we’re told behind closed doors, one of McCarthy’s allies threatened their committee assignments, saying they would not sit on key committees if they continued to oppose McCarthy.

So still playing out behind closed doors as we head into this consequential vote within 2 hours.

I worked diligently with my conservative colleagues to put together a deal that would unify the conference behind Kevin McCarthy.

As things stand, I will not vote for Kevin McCarthy for Speaker. pic.twitter.com/6NTfYdfwcz

As it stands, I will not be voting for Kevin McCarthy to be Speaker of the House. pic.twitter.com/rUDuHS45hH

BREAKING: Rep. @LaurenBoebert says she will NOT be voting for Kevin McCarthy for Speaker pic.twitter.com/U8RJrOWYvk