Martina Navratilova Diagnosed With Two Forms Of Cancer, Voes To Fight: “It’s going to stink for a while but I’ll fight with all I have got” 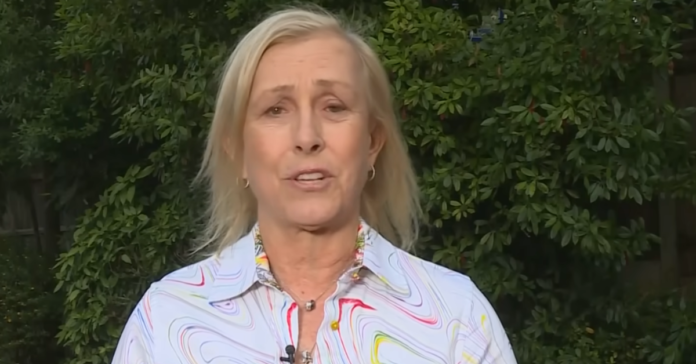 Tennis legend Martina Navratilova revealed Monday she was diagnosed with throat and breast cancer. “This double whammy is serious but still fixable,” she said. “I’m hoping for a favorable outcome. It’s going to stink for a while but I’ll fight with all I have got.”

A spokesman for Navratilova told The Times that “both these cancers are in the early stage with great outcomes.”

According to ESPN: “Navratilova, 66, will begin treatment this month. The nine-time Wimbledon champion has been diagnosed with type HPV throat cancer, which is treatable, and is facing her second bout with breast cancer, which is unrelated to the throat cancer and was discovered during examinations of her throat.”

Navratilova, who is a lesbian and a trailblazing lesbian at that, came under fire from the hysterical left for saying transgender women should not be competing in women’s sports.

Martina Navratilova, one of the greatest athletes in history, has been diagnosed with Stage 1 throat cancer.

In addition, an unrelated form of breast cancer was discovered during exams. Both cancers are in their early stages with great outcomes.

Thinking of you, @Martina ❤️

One would think they would accept the opinion of an expert like Martina but they did not and continue to trash her to this day.

She said about Lia Thomas:

“It’s not about excluding transgender women from winning, ever.

“But it is about not allowing them to win when they were not anywhere near winning as men.

“You try to keep it as close as possible to what it would have been had you been born in the female biological body in the first place.”

“The solution perhaps for now is for Lia Thomas to swim in another lane or you can compete but you don’t get the medal because the (NCAA) rules are not correct.

“Right now, the rules are what they are.

“Maybe put an asterisk there, if she starts breaking records left and right and if Lia goes to the Olympics because she’s hitting her prime now physically.”

Martina won a combined 59 Grand Slams across singles, doubles, and mixed events in her career between the 1970s and early 2000s. Navratilova’s career singles record was 1,442-219 for a winning percentage of 86.8%.

Tennis legend Martina Navratilova just announced she has been diagnosed with throat and breast cancer. https://t.co/IO4MvMF2yf