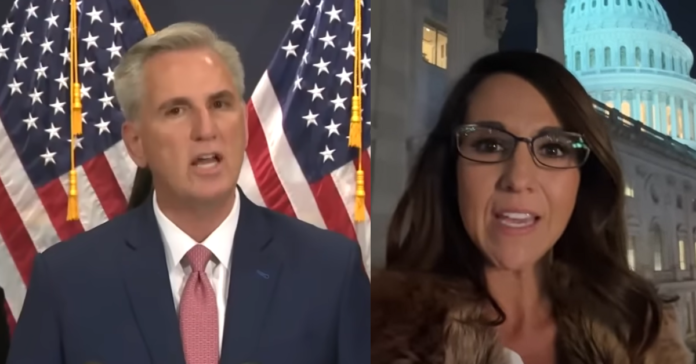 Kevin McCarthy is getting desperate to get enough votes to become the next Speaker of the House so he made a last minute cave to demands from Lauren Boebert and others in the GOP caucus. One of the biggest concessions they wanted from Kevin was to change a rule Nancy Pelosi made blocking votes of no confidence in the Speaker.

Pelosi was afraid she would get deposed if the vote to ‘vacate the chair’ or replace the Speaker was easy to call for any House member.  So she changed the rules to make it nearly impossible to question her rule.

Kevin was adamant he would keep Pelosi’s rule in place as it would protect him but the GOP wants their power back so Kevin made a compromise. He said he would allow a move to “vacate the chair” with the approval of five Republican members, rather than at least half of the House GOP conference or a vote of committee chairs. But it may be too little too late as he is still a few votes short and he us running out of time.

In a letter to GOP colleagues, McCarthy said:

“I will use my selections on key panels to ensure they more closely reflect the ideological makeup of our conference, and will advocate for the same when it comes to the membership of standing committees. This will facilitate greater scrutiny of bills from the start so they stand a greater chance of passing in the end.”

“I think what he’s trying to do is the bare minimum that he needs to try and get to where he can get the votes. And that’s not indicative of somebody that really wants to embrace new ideas, reject the status quo and unify all members in the conference.

“Leaders like [former GOP Speakers] Paul Ryan [Wis.] and John Boehner, and everyone before them, were fine to work under those provisions.

“And now, suddenly, in 2022, the guy that wants to be Speaker wants to double down on what [House Speaker] Nancy Pelosi [D-Calif.] put in place and actually make it less accountable than even she did.

A group of nine conservatives are not buying it and released a letter saying McCarthy’s response does not adequately meet their standard for the motion to vacate the chair.

“At this stage, it cannot be a surprise that expressions of vague hopes reflected in far too many of the crucial points still under debate are insufficient,” the members said in the letter.

“The progress made thus far has been helpful and should guide our thinking going forward.”

I don’t see any scenario where I’d support Kevin McCarthy as House Speaker.

McCarthy has a track record of cutting backdoor deals with Democrats. pic.twitter.com/UzUz67yd7K

Rep. Bob Good says unequivocally on Fox & Friends that he won’t vote for Kevin McCarthy for speaker, then says of an alternate candidate, “you’ll see that name tomorrow on the second ballot” pic.twitter.com/I3ollpJw8A

Martina Navratilova Diagnosed With Two Forms Of Cancer, Voes To Fight: “It’s going to stink for a while but I’ll fight with all I have got"