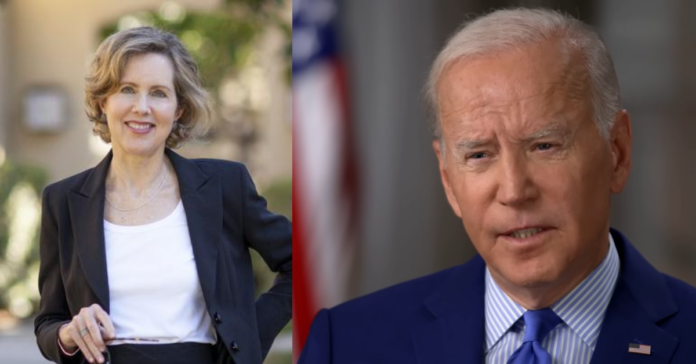 Noted author Heather Mac Donald scolded the left for ‘blaming America first’ at the 2022 Encounter Books Gala after receiving the Jeane Kirkpatrick Prize for Academic Freedom. She said this blame America mentality is behind the war on free speech we are all fighting and we must win to preserve this great country.

She said: “With a topic like free speech, the current moment calls for a reference to Elon Musk and his heroic attempts to liberate Twitter from Big Tech censorship. Unfortunately, the only thing I know about Elon Musk is that he built Roger Kimball’s car.

I thought I would begin, therefore, by referring to a different American hero, the woman whose name graces this wonderful award. In 1982, student agitators prevented Jeane Kirkpatrick from speaking at several campuses across the country. Protesting U.S. policy in Central America, hecklers silenced ambassador Kirkpatrick at the University of California, Berkeley, and at the University of Minnesota. Imagine the aggression needed to silence Jeane Kirkpatrick!

Smith College told her that it could not assure her safety during a commencement address, so the address was cancelled. Business as usual, you may be thinking. In fact, the reaction of campus administrators, and even of students themselves, to these shutdowns seems to come from a different world.

The chancellor of the University of California announced his embarrassment that his university had “succumbed to mob rule.” That university’s Board of Regents demanded that an apology be sent to Kirkpatrick.

Even the group that organized the Berkeley protest, Students Against Intervention in El Salvador, admitted that the heckling had gone too far. The group had no intent, it said, to curtail the speech of “those who disagree with us.” As anti-military protests spread across the country, the American Association of University Professors, the United States Student Association, and other academic bodies denounced the use of the “hecklers’ veto” and asked faculty and students “to reaffirm our traditional commitment to freedom to speak and to listen.”

A group of black Yale students scream and curse at Yale sociologist Nicholas Christakis for what seems like an eternity, preventing him from addressing them. “Be quiet,” shrieks one, “you are disgusting!”

“It’s not a debate!” screamed another student. Merely invoking free speech, said a student, creates a “space to allow for violence to happen on this campus.”

Yale’s President Peter Salovey rushed to express his sympathy–not with the beleaguered Christakis–but with his tormentors and their allies: “their concerns and cries for help made clear that some students find life on our campus profoundly difficult.”

As if this were not nauseating enough, Salovey thanked Yale’s students for offering him the opportunity to “listen to and learn from you.”

This episode proved a template.

In 2016, Emory students demanded protection from a few Trump 2016 slogans that had been chalked on campus sidewalks. Trump’s name exacerbated the “unsafety of minority students,” they said. Emory’s president validated what he called the students’ “pain in the face of this perceived intimidation.”

The chalkers would be tracked down and subjected to the “conduct violation process,” and Emory would implement yet more diversity bureaucracy to protect students from “harmful speech.”

In 2017, hundreds of UC Berkeley faculty called for cancelling a talk by provocateur Milo Yiannopoulos on the grounds that its content would “harm students.”

The faculty got their wish. Antifa activists beat and pepper sprayed would-be attendees, hurled flaming rockets at the auditorium where Yiannopoulos was supposed to speak, and ransacked city businesses. Afterwards, several Berkeley professors lauded the rioters for shutting down the event through what one professor called “very efficient” attacks on university property.

Getting beaten up by leftist activists or losing your livelihood to vandalism is not a “harm,” to borrow a phrase, that today’s academic left recognizes.

In 2018 professors at the University of Chicago circulated a petition denouncing a planned debate between Steve Bannon and a business school professor.

The debate would “threaten the safety of people of color on and off campus,” the signatories said. The debate never occurred.

In June 2022, the dean of the University of Pennsylvania Law School asked the faculty senate to impose “major sanctions” on tenured law professor Amy Wax (plausible translation: fire her!) because of the “severe harms” she had inflicted on the Penn community with her challenges to campus orthodoxies regarding racial preferences, immigration, and sex differences.

The private sector has become just as eager to prevent alleged harm to its employees from contrarian speech. In 2018, Google fired computer scientist James Damore for having suggested in a memo that males and females have different interests and personality traits.

Those differences, Damore proposed, helped explain why Google’s engineers are not 50% female. Heresy. Damore had to go because he had “hurt” Google’s employees, announced the CEO.

Book sellers are disappearing books, payment services are blocking donations to disfavored commentators, because those books and those commentators allegedly harm vulnerable victim groups. The Biden administration is bringing government’s vast resources down upon “disinformation.”

So, what has changed between the early 1980s and today?

The conquest of every mainstream institution by an idea that Ambassador Kirkpatrick memorably identified in 1984. “The progressive left always blames America first,” she said in a GOP convention speech.

Kirkpatrick was referring to foreign affairs, but she would not have been surprised by the spread of the “blame America first” instinct to every aspect of domestic life, and indeed to the entirety of Western civilization. After all, she invoked Jean Francois Revel’s warning that a civilization that “feels guilty for everything it is and does will lack the energy and conviction to defend itself.”

And so today the elites themselves are waging war on meritocratic standards, on our civilizational inheritance, and on the West’s unparalleled accomplishments, all in the name of atoning for what is said to be America and the West’s unique racism and cruelty towards the “Other.”

This “blame America first” instinct lies behind the war on free speech. The novel justification for today’s censorship is the maudlin claim that dissenting speech harms favored victim groups.

The reason they are so easily harmed is that they are already barely surviving in the maelstrom of oppression that is the United States. So vulnerable are these victims that they can be struck down–even mortally–by ideas that they don’t like.

If you think that Americans have the right to decide who crosses their borders, you are engaged in hate speech.

If you think that sex differences are written into our chromosomes and cannot be changed by fiat or by castration, you are engaged in hate speech.

And hate speech, the new dogma goes, can be censored, since it is not actual speech. Rather, it is conduct–assaultive conduct–against the marginalized. This definitional shift is at the core of the contemporary push for censorship.

So, how do we restore our freedoms?

We could try to give the left-wing establishment a crash course in the revolutionary breakthrough that is the First Amendment.

Our academic elites believe that the only speech that deserves protection is that with which the left agrees or which the government deems true. These opinion leaders portray the constitutional ban on censorship as a ploy used by the majority to maintain power, rather than, as Frederick Douglass understood, a key protection for minorities and dissenters who seek to break up illegitimate power.

They have no appreciation for the marketplace of ideas and the difficult, dialectical process of truth-seeking.

It is going to be hard to get those propositions accepted as long as America and the West are cast as racist oppressors, and as long as alleged victimhood is the most coveted status in elite circles today. So, we are going to have to take on the lies about Western civilization directly.

We must assert at every opportunity that the unique features of the West are its passion for discovery and exploration, its hunger to systematically understand the workings of nature, the development of limited government, and the concepts of tolerance and of equality before the law.

The West is not distinguished by domination and exploitation.

Those predatory practices have been found in every human society, and are still the norm in many countries today.

Only the West created the principles with which to rein in the human drive for abusive power.

And when they still call us racists for standing up for meritocracy and the rule of law, we must never, ever, as Jeane Kirkpatrick understood, apologize,” she said.