Chief Justice John Roberts Takes Veiled Swipe At Chuck Schumer In Year End Report: “A judicial system cannot and should not live in fear, the importance of rule by law instead of by mob” 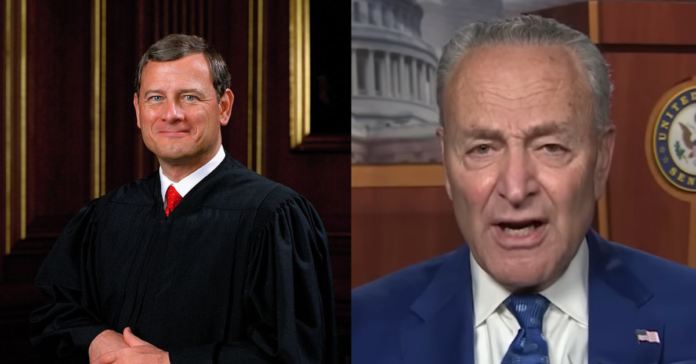 Chief Justice John G. Roberts Jr. took a veiled shot at Chuck Schumer in his annual report on the state of the federal judiciary by focusing on threats to judges’ physical safety. Roberts said:

“The law requires every judge to swear an oath to perform his or her work without fear or favor, but we must support judges by ensuring their safety. A judicial system cannot and should not live in fear.

“Judicial opinions speak for themselves, and there is no obligation in our free country to agree with them. Indeed, we judges frequently dissent—sometimes strongly—from our colleagues’ opinions, and we explain why in public writings about the cases before us. But Judge Davies was physically threatened for following the law.

“His wife feared for his safety. The judge was uncowed, and happily so were others who stuck up for the rule of law—not just with regards to the judge, but to even greater threats against the schoolchildren, their families, and leaders like the NAACP’s Daisy Bates.

“Following a bomb threat on the Sam Peck Hotel where Judge Davies was staying across the street from the courthouse, the judge offered to the proprietor to move elsewhere. Mr. Peck said, “no Judge, you stay right here.”

“I want to thank the Members of Congress who are attending to judicial security needs— these programs and the funding of them are essential to run a system of courts.

“Judge Esther Salas, a U.S. District Judge in New Jersey, has been a brave, able, and admirable advocate for this cause since her son Daniel Anderl was murdered in 2020 when he answered the door to her home in what was meant to be an attack on her.

“Just this month, Congress enacted the Daniel Anderl Judicial Security and Privacy Act to help protect judges and their families.

“The law requires every judge to swear an oath to perform his or her work without fear or favor, but we must support judges by ensuring their safety.

“A judicial system cannot and should not live in fear. The events of Little Rock teach about the importance of rule by law instead of by mob.

“I thank the U.S. Marshals, Court Security Officers, Federal Protective Service Officers, Supreme Court Police Officers, and their partners who are on duty as we ring in the year, working to ensure that judges can sit in courtrooms to serve the public throughout the coming year and beyond.

“They will make it possible for every American to visit a courthouse, because the buildings and what they represent belong to the public.

“Once again this year, I am privileged and honored to thank all of the judges, court staff, and other judicial branch personnel throughout the Nation for their outstanding service,” he said.

Schumer said earlier that Justices Brett Kavanaugh and Neil Gorsuch “won’t know what hit” them if they rule in favor of abortion restrictions.

“Justices know that criticism comes with the territory, but threatening statements of this sort from the highest levels of government are not only inappropriate, they are dangerous.

“All members of the court will continue to do their job, without fear or favor, from whatever quarter.”