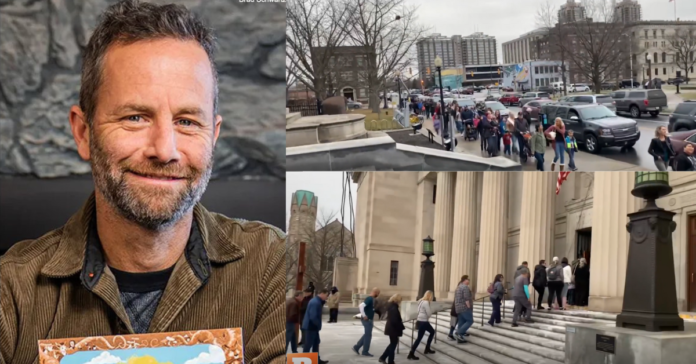 Hollywood star Kirk Cameron’s Christian book reading drew record numbers of parents and kids after the Indianapolis Public Library refused to host him but caved after a massive backlash.

“This was the largest event held at the library in its 137 years of existence,” Zac Bell with BRAVE Books, the book’s publisher, said. “The turnout was phenomenal! We were blown away.”

Kirk said: “No more will the family of faith be shut out from the public square! Join me and @bravebooks.us to champion a new movement to take back libraries for goodness, kindness, faithfulness and self-control.

“I’m happy that the two libraries changed their decision and will allow my voice to be heard and my book to be read.

“I hope they realized that their position of denying me a story hour reading was not only unfair and illegal, but that we would all be better off if we listened to each other’s perspectives,” he added.

“I hope that this victory acts as a source of courage for Christians and conservatives across the country to be brave and not back down, making sure that we are the salt of the earth and the light of the darkness.”

“I love situations in which we have two ways to win and zero ways to lose,” Trent Talbot, CEO of Cameron’s book publisher, said.

“We forced these bullies to either take off their masks and show their true colors of unabashed anti-Christian and anti-American bias (as well as catch themselves in a spicy lawsuit) OR the bullies were going to realize that Kirk and Brave were here to fight and they would back down.

“The libraries are lying in order to avoid a potential lawsuit.

“We messaged these libraries asking to ‘schedule a story hour.’ Any sane person would take that as scheduling space.

“They broke the law by denying us space to do our story hour, so now they are covering their tracks by saying they were refusing to sponsor a story hour.

“One, that’s a lie. We have the emails and recordings.

Cameron wrote a letter to the library after they denied him access asking them to reconsider:

“One of the aspects that has always made this country great is the free expression of ideas essential to an informed citizenry. That is why I was surprised to learn from my publisher that you were not interested in having me join your patrons for a reading of my new book.

“I hope you will revisit that request.”

He said when he published the book:

“BIG NEWS!!!  I have a brand new children’s book out!! It’s titled – “As You Grow” and it’s part of the Freedom Island Book Club by BRAVE Books.

“My book teaches kids about Biblical wisdom and the importance of relying on Biblical principles through all seasons of life. With games and activities in the back of my book, the kids in your life are sure to be blessed by this book!

“Our children’s morality is ingrained by the age of 10.

“We need resources to help establish a strong moral foundation and the Freedom Island Book Club is the perfect tool to do just that.

“When you subscribe your family will receive a new book each month that teaches an important pro-God, pro-America lesson which parents and grandparents need more than ever right now to help teach their children and grandchildren good morals and values.”

Suspect In Killings of 4 University of Idaho Students Arrested in Pennsylvania: Report