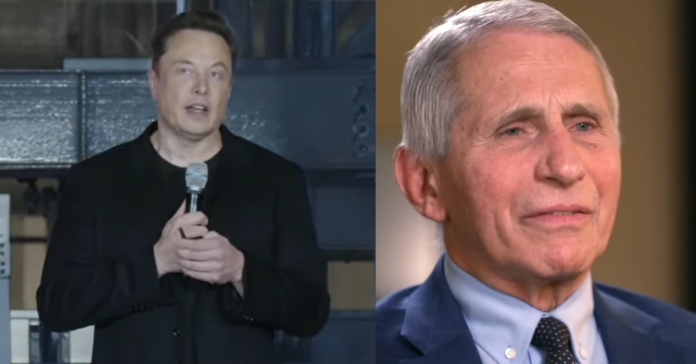 Twitter CEO Elon Musk called Dr. Anthony Fauci ‘creepy’ over the decorations Fauci has in his home office. According to a profile in The New York Times, Fauci’s office is decorated with portraits of himself. The Times reported:

“The walls in Dr. Anthony S. Fauci’s home office are adorned with portraits of him, drawn and painted by some of his many fans. The most striking one is by the singer Joan Baez. The two of them, he said, “have become pretty good friends over the years.”

“Dr. Fauci seemed a little uncomfortable with people knowing about the pictures. He said that previously, when they were captured on camera, the “far right” attacked him as an “egomaniac.” If someone goes to the trouble of sending him a portrait of himself, he said, he would “feel like I’m disrespecting them” if he discarded it.”

Fauci must have forgotten the millions of times the left and the mainstream media mocked Trump and called Trump creepy for having portraits of himself in his clubs. But Trump is fair game but Fauci is off limits because the left censors while the right favors free speech.

“I have no problem testifying before the Congress. I have nothing to hide. I could easily explain and justify everything I’ve done. So they’re making a big to-do about it, but I respect the concept of oversight.”

On working with Trump he said:

“It was obviously challenging because I have said — and I’ll say it to you — I have a great deal of respect for the office of the presidency of the United States.

“And I have had the opportunity to tell presidents things that sometimes they may not want to hear, but they took what I said seriously and respected me for giving them the straight scoop.

“I did not like nor seek out a position of having to publicly contradict a president of the United States. The far right seems to think I did that deliberately and took pleasure in it. I did not.

“But I had to do that for my own personal and professional integrity and for fulfilling my responsibility.

“My primary responsibility is to the American public. I serve the public; I don’t serve a political party. I’m completely nonpolitical,” he said.

Musk has been calling out Fauci this week. He said earlier:

“New Twitter policy is to follow the science, which necessarily includes reasoned questioning of the science. Anyone who says that questioning them is questioning science itself cannot be regarded as a scientist.”

The last comment was directed at Fauci who said earlier: “That’s what’s called the scientific process. As you get more information, it’s essential that you change your opinion, because you’ve got to be guided by the science and the current data.

“Attacks on me, quite frankly, are attacks on science. All of the things I have spoken about, consistently, from the very beginning, have been fundamentally based on science. Sometimes those things were inconvenient truths for people.”

Bill Maher: “The woke left pisses me off so much, all my friends b*tch endlessly about their f*cking woke kids”