Despite constant and overwhelming media hype that its work would bring an end to former President Donald J. Trump, the vaunted House select committee to investigate the so-called “insurrection” of January 6, 2021 is going out with a whimper.

Days before House Democrats are forced to surrender control of their committees to Republicans, the uber-partisan panel said that it would be withdrawing its subpoena of Trump, a document that was greeted with jubilation by Resistance Twitter when it was issued in October with many seeing it as the elusive silver bullet that would finally bring about the end of their hated enemy’s political career.

On Wednesday night, committee chairman Rep. Benny Thompson acknowledged that it was over in a letter to Trump’s attorney that was obtained and reported by CNN.

“In light of the imminent end of our investigation, the Select Committee can no longer pursue the specific information covered by the subpoena,” he wrote.

“Therefore, through this letter, I hereby formally withdraw the subpoena issued to former President Trump, and notify you that he is no longer obligated to comply or produce records in response to said subpoena,” the Mississippi Democrat added. 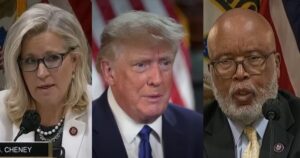 Trump greeted the news as the running up of the white flag by the Liz Cheney-led tribunal that ultimately flopped because it failed to captivate people outside of the D.C. Beltway and other coastal bastions of the political and cultural elite.

“Was just advised that the Unselect Committee of political Thugs has withdrawn the Subpoena of me concerning the January 6th Protest of the CROOKED 2020 Presidential Election. They probably did so because they knew I did nothing wrong, or they were about to lose in Court. Perhaps the FBI’s involvement in RIGGING the Election played into their decision. In any event, the Subpoena is DEAD!” Trump wrote on Truth Social. Last week, Nancy Pelosi’s hand-picked all-star team of virulent Trump haters and veterans of the failed impeachments put out its official report of the costly investigation, an 845-page doorstop of a final product that like the Russian collusion witch hunt conducted by special counsel Robert Mueller, brought the sound of sad trombones from leftist dead-enders and their quisling RINO allies who were once again left sorely disappointed that the circus ended without producing the head of their hated enemy on a pike.

While the committee did make criminal referrals to Attorney General Merrick Garland’s Justice Department – which has been weaponized by the Democrats – the panel failed to meet its lofty expectations as was apparent early on when its primetime hearings were a ratings bomb despite the wall-to-wall media hype and bringing in a former ABC News producer as a “master documentary storyteller” to craft the nationally televised dog and pony show.

Pelosi’s sham committee never recovered from the ratings debacle and the subsequent demolition of Cheney by voters in her home state of Wyoming who delivered a 40-point beatdown to the snarling attack dog in her August congressional primary, a humiliating loss to her Trump-endorsed opponent that left the mortally wounded panel slowly bleeding out heading into the fall season.

The committee’s sad end is a stark contrast to the hubris of its members when the nationally televised hearings debuted this summer, including Thompson who seemed to see the Soviet-style political spectacle as a historic chance to right previous wrongs perpetrated upon an oppressed minority.

“I’m from a part of the country where people justify the actions of slavery, the Ku Klux Klan, and lynching,” Thompson said.

“I’m reminded of that dark history as I hear voices today trying to justify the actions of the insurrectionists on January 6th, 2021,” the race-baiting chairman said in his opening statement.

Like the infamous McCarthy hearings of the 1950s, the J6 committee will be remembered as another dark chapter in the nation’s history.

Trump Scolds Paul Ryan For Falling “Into The Democrat Trap: Paul Has Always Been A Loser”