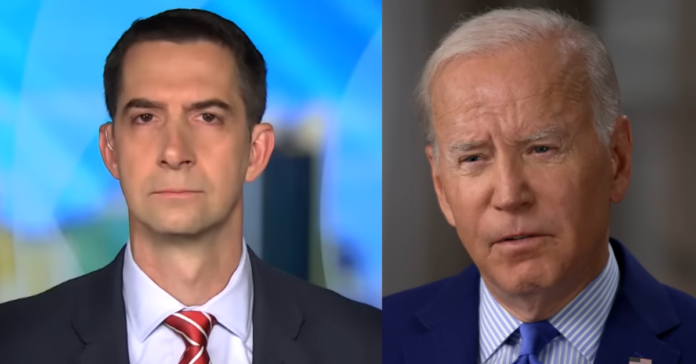 GOP Senator Tom Cotton reached his limit with President Joe Biden’s ‘woke’ military and is blowing the whistle on what in the hell is going on and it is not good. Tom said:

“The U.S. military should be the ultimate meritocracy – nothing matters on the battlefield other than training, leadership, and the trust between fellow soldiers, sailors, airmen, and Marines.

“Unfortunately, recent Democrat administrations – and Joe Biden’s is no exception – have made race, gender, and controversial political teachings an integral part of military training and values, from the Pentagon to our service academies.

“But unlike college campuses, elite boardrooms, and Hollywood movies, social experimentation in the military has life and death consequences, not to mention repercussions for troop morale and recruitment. “That’s incredibly dangerous, especially as we face rising threats from China, Russia, and other global adversaries.

“This has real world consequences for recruitment, especially since young conservatives are far more likely to serve in the military than their liberal counterparts.

“This year, the recruitment crisis has continued with the Army expected to miss its recruitment objective by as many as 30,000 soldiers. The Department of Defense states in its own personnel and readiness update that the failures in recruitment can partly be attributed to so-called “social unrest.”

“The Pentagon’s woke obsessions could have severe effects on military preparedness and readiness.

“The Navy – which published a reading list that included books by the likes of Ibram X. Kendi – released a report advocating for less testing for officers in order to boost minority representation.

“The Army similarly attempted to lower fitness standards in order to increase the number of women in combat. By placing political goals ahead of troop training standards, Pentagon bureaucrats are risking soldiers’ very lives.

“In recent years, the academies have also taught radical doctrines like Critical Race Theory under the label of “diversity and inclusion.” The Air Force Academy established a special “Diversity and Inclusion reading room” that it described as a “safe space” for America’s young warriors. It also created an organization of hand-picked cadets – identified by a purple braid on their dress uniform—to spread these controversial ideals in the ranks.

“When Republicans take control of Congress next year, we must return the military’s focus to its core mission.

“We should start by firing every last Diversity, Equity, and Inclusion Officer on the Department of Defense’s payroll.

“All unnecessary and onerous administrative training, especially so-called “extremism” trainings, should be eliminated.

“We must also narrow the scope of education at war colleges and service academies to fighting and winning wars – all else can be taught and learned elsewhere. Finally, we should uphold – not erode – training standards for all services.

“The U.S. military is a sacred and honorable institution. It protects us every single day from threats abroad – and in return, we must protect it from divisive politics at home,” he said.

Greg Abbott Fires Back, Checkmates Joe Biden: "These migrants willingly chose to go to Washington, D.C., and they were processed and released by the federal government”