Michelle Obama Takes Swipe At Barack: “People think I’m being catty for saying this, there were 10 years where I couldn’t stand my husband” 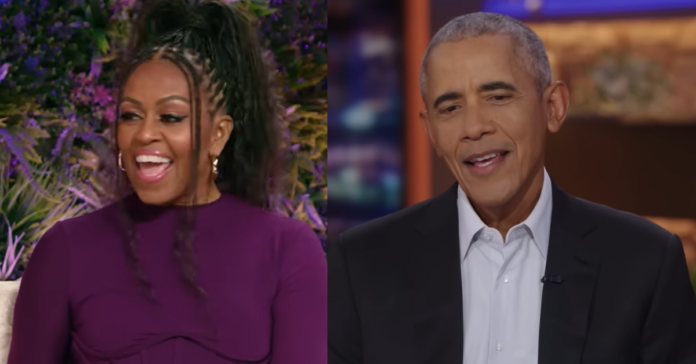 Former first lady Michelle Obama took a swipe at former President Barack Obama saying she “couldn’t stand” her husband for about ten years. She said in an interview with Revolt:

“People think I’m being catty for saying this: it’s like, there were 10 years where I couldn’t stand my husband. And guess when it happened? When those kids were little.”

“For 10 years while we’re trying to build our careers and worrying about school and who’s doing what and what, I was like, ‘Argh, this isn’t even.’ And guess what? Marriage isn’t 50/50, ever. Ever.

“Do you like him? I mean, you could be mad at him, but do you still look at him and go, ‘I’m not happy with you, but I respect you.

“I don’t agree with you, but you’re still a kind, smart person,’” she said.

“The fact that she thought it was so important to set aside some time to have this family talk with Black women in a safe space — where she could go, ‘Hey, this is what I’ve learned. This is what I want to tell y’all’ — is so representative of who she is.

“She knows the struggle of being a Black woman. She knows we have unique challenges and different hurdles. We’re just so honored that she decided to choose to sit down and have that conversation with us.

“I know that she’s a national treasure, just in being herself, living in her own truth, but what she represents to Black women and women of culture is is exponentially more heartfelt.

“We realized in real time, not in hindsight, what she was doing is going to change how people see us.”

“Black women are such a critical piece to the fabric of Black culture — to all culture — so it’s beautiful to be able to facilitate those conversations and have them happen on our platform,” said Revolt CEO Detavio Samuels.

“Our strategy for content development is relatively simple,” Samuels added.

“Where most people in TV tried to go find stories that they like and then they go find talent and try to plug that in, we do the opposite.”

“We’re trying to be a $100 billion corporation. We want those those types of resources to put into the creators in our world. That’s the bigness of the dream and the vision.”

“The big idea that we have for next year is to take the app that is there now and turn it into a super app for the culture.”

Dem Rep Jaime Raskin Makes Heartbreaking Announcement: "After several days of tests, I have been diagnosed with Diffuse Large B Cell Lymphoma”